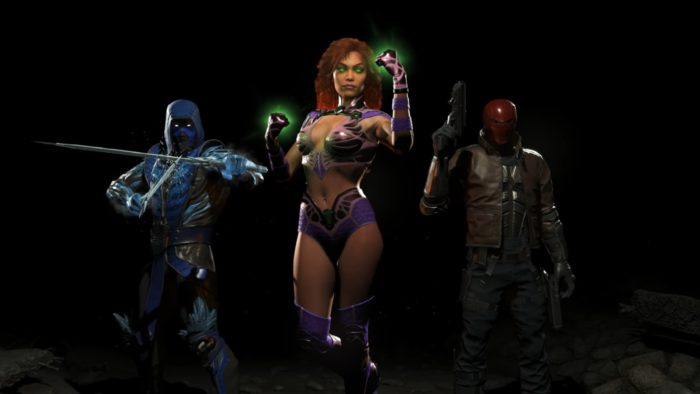 The hype for Injustice 2 is steadily building. After the reveal of Joker last week, rounding out the game’s launch roster, Warner Brothers and NetherRealm studios have gone and revealed the three characters slated for the first Fighter Pack. Named simply Fighter Pack 1, the DLC will bring Starfire of Teen Titans fame, everyone’s favorite Robin gone rogue Red Hood, and Mortal Kombat icon Sub-Zero. While no combat was shown, you can see them each make their stylish entrance in the official reveal trailer.

It will be interesting to see how Injustice 2’s new mechanics, namely the RPG elements and deep customization features, extend to each of the DLC fighters. Whether or not Sub-Zero will have a legitimate fatality in order to show his roots is also unknown. You can get Fighter Pack 1 as part of the Ultimate Edition, or buy it separate when it releases.

Another cool tidbit was revealed at the very end of the trailer, when six silhouettes, representing six future DLC combatants, appeared behind the newly announced fighters. While some are clear to make out, we’re quite curious about who the other can be.

Are you excited for Injustice 2? Looking forward to the new characters announced for the battle? Let us know your thoughts in the comments below.