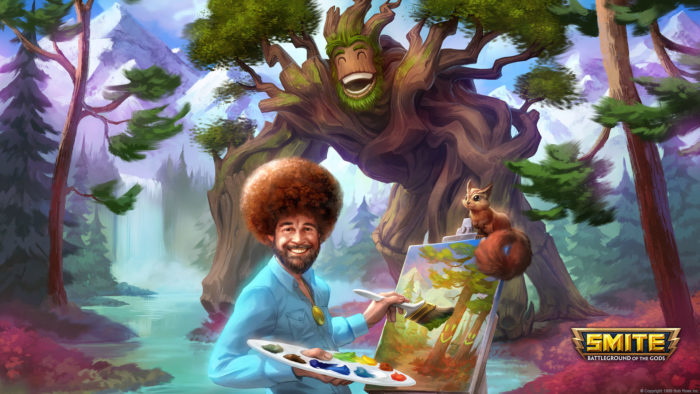 Smite developer Hi-Rez Studios announced the details of the 4.8 update patch notes this week, which includes bug fixes, item changes, and a character skin based on Bob Ross.

The prolific host of PBS’s The Joy of Painting is joining the game as a skin for Sylvanus, letting the artist ride on the character’s back while creating a painting. Sylvanus also sports a green beard and a huge smile, playing into the “happy trees” motif that Ross is known for. In addition, Sylvanus’s attacks are changed to throwing paint, planting trees, and summoning paintbrushes from the ground.

The studio showed off the new skin in a Twitch stream, which can be seen here around the 46 minute mark. A Bob Ross bundle including the skin will be sold in-game, alongside a jump stamp, loading frame, and loading screen. The bundle costs $9.99 or 700 gems and releases on May 9 for PC and Mac, while Xbox One and PlayStation 4 receive it on May 16.

The full 4.8 patch notes include five other skins, a new emote, new achievements, and adjustments on player levels and gold fury. The balance changes will be tested on the 4.8 public test server, but may not be included until the 4.9 update if there are no problems.