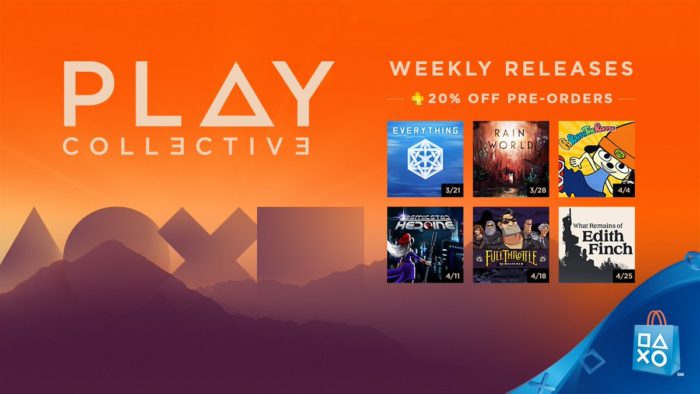 Sony has today revealed a new PlayStation Store Sale called Play Collective, which will see six new games, launching over the next six weeks, given PlayStation Plus discounts.

The news was revealed in a post on the PlayStation Blog and also sees the reveal of some release dates for some highly anticipated games. The full list of titles included in Play Collective is:

Everything: Releasing March 21. “Everyting is about the quiet explosion of life going on all around us. This very unique game experience has been developed in secret for three years and is finally being launched on PS4 and PS4 Pro. Everything takes place in the world we live in now. It features one million+ years of gameplay, a rich musical score, and thousands of playable characters. Everything is created by Irish artist David OReilly (Mountain), and narrated by the late great British philosopher Alan Watts.”

Rain World: Releasing March 28. “You are a slugcat. The world around you is full of danger, and you must face it — alone. Separated from your family in a devastating flood, you must hunt for food and shelter between terrifying torrential downpours that threaten to drown all life. Climb through the ruins of an ancient civilization, evade the jaws of vicious predators, and discover lands teeming with strange creatures and buried mysteries. Find your family before death finds you!”

Full Throttle Remastered: Releasing April 18. Originally developed by LucasArts and released in 1995, Full Throttle is another classic adventure game from Tim Schafer. “Now more than 20 years later, Full Throttle is back in a remastered edition featuring all new hand-drawn and 3D high-resolution artwork, with remastered audio and music.”

You can see more details about each of the games and the Play Collective Sale by visiting the PlayStation Blog.