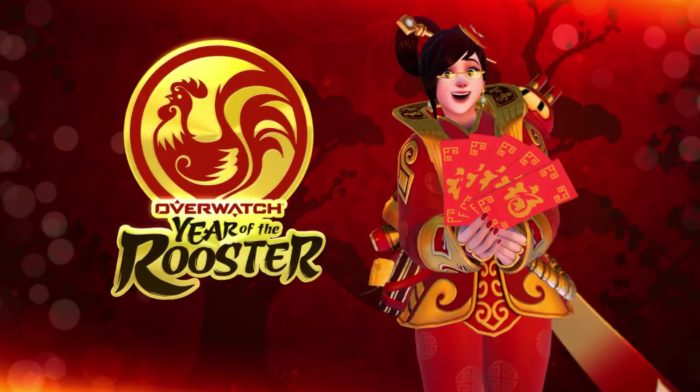 Overwatch’s newest event has finally gone live with patch 2.03 and it appears to be more than just a simple collection of skins and sprays. Dubbed “Year of the Rooster” this event is meant to celebrate the tenth sign in the Chinese Zodiac and will take place at a reskinned version of Lijiang Tower. While this event was teased by Blizzard last week, players were left in the dark on information until today.

It appears that this event will be bringing a plethora of awesome looking skins for them to collect, along with new Highlight Intros, emotes, sprays, victory poses, and voice lines. These will only be acquirable via special loot boxes that will only appear during the duration of this event, however, you can purchase all of the event items at an inflated price via gold coins.

So far we know that Junkrat, Bastion, Mercy, Tracer, and Symmetra will be receiving simple rare skins that alter their color pallet and add smaller details to their overall kit. On the flip side, Winston, Zenyatta, Roadhog, Mei, D.Va, and Reinhardt will all be getting legendary skins that are either representative of the festival itself or are inspired by the 1952 novel Journey to the West. These skins come at a rather hefty price as each legendary skin will run you 3,000 gold so perhaps it’s best to wait until the last day of the Overwatch festival before you purchase one to avoid duplicates.

However, the biggest news comes with the new game event that was announced with the Year of the Rooster event as it’s been a fan requested feature for some time. Capture the Flag is making its way to Overwatch, which is a mode that players have been asking for in droves given the title’s heavy focus on objective based gameplay. While we only got a glimpse of the gameplay, it’s clear that faster characters like Winston, Tracer, Lucio, and Sombra will be ideal for picking up the flag.

This is probably a test run for Blizzard to see how the balancing of such a game mode goes before they try to implement it into the core game itself. The Overwatch Year of the Rooster event will end on February 13. Now if you excuse us, we need to go grind for loot boxes in Quick Play.