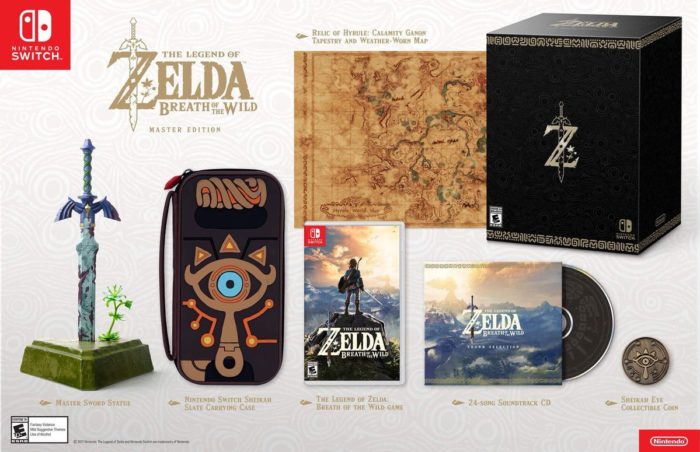 Nintendo has announced that The Legend of Zelda: Breath of the Wild will be receiving two other editions to go alongside the standard version. The collector’s edition of the game, titled the Master Edition, will come with a Master Sword figure, soundtrack, and more.

The news followed the company’s Switch event, which showed off the console in more detail, as well as providing players a glimpse of what games they can expect to be playing.

With Breath of the Wild now slated for a March 3 release date, to coincide with the system’s launch, there are now two new editions that players can pick up. Headlining Breath of the Wild’s different editions is the Master Edition. Alongside your copy of the game, the Master Edition also comes with a Master Sword of Resurrection figure, a Sheikah Eye Collectible Coin, a Relic of Hyrule: Calamity Ganon Tapestry, Weather-Worn Map, Sheikah Slate Carrying Case, and a Breath of the Wild Soundtrack. This neat collector’s edition will set you back $129.99 if you want to get your hands on one.

Alternatively, players can pick up The Legend of Zelda: Breath of the Wild Special Edition. This version comes in at $99.99, and contains everything found in the Master Edition, minus the Master Sword figure.

Nintendo’s event has now concluded, but more news is continuing to break regarding the console and its games. Be sure to keep it locked to Twinfinite for all of the latest news.