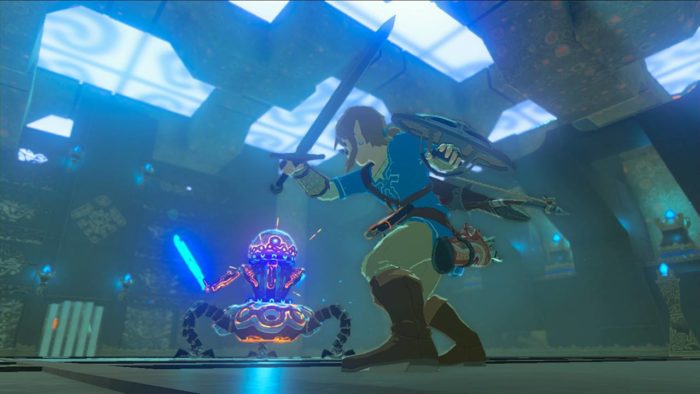 This new art has been released for Nintendo’s upcoming The Legend of Zelda: Breath of the Wild, set to be released for the Wii U and the Nintendo Switch in 2017.

Shared on the series’ official Facebook page (via DualShockers), the image shows Link, the series’ long-running main character, with sword and shield drawn, about to do battle with a strange new enemy.

It’s interesting to see the mix of art styles that Breath of the Wild is using, from the lush green of Hyrule field to the robotic, mechanical look of the enemies in the game. The area link is in in the image seems to be quite an urban environment, with hard corners and harsh lighting.

Nintendo has released a few images and videos in the last few months, and from what we’ve seen so far, the game looks like a huge, unique open-world with a wide variety of different enemies and areas.

Though a specific release date has not been announced for the game, there was a report in November that it would not be releasing alongside the Switch.

Comments
Continue Reading
Related Topics:nintendo, Switch, The Legend of Zelda: Breath of the Wild, wii u