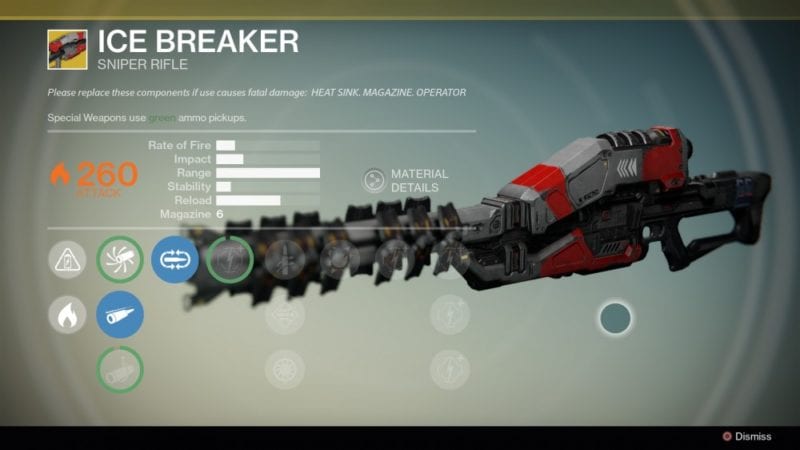 At the Playstation Experience 2016, we saw a lot of game announcements blasted at us quickly. The crazy space magic shooter, Destiny, was on the list of games receiving exciting content boosts with the reveal of The Dawning, however all of the rest of it pales when realizing that the Icebreaker is making its return. When the trailer for The Dawning was spinning, it was showed that new weapons would be added and in that list, we saw the red, god-tier sniper itself.

You may remember the Icebreaker as one of the only snipers, if not one of the only guns, ever used in the original form of Destiny. This exotic sniper had the ability to regenerate ammunition quickly over time while boasting high stability and impact, which made it one of the single most powerful weapons in the entire game. And definitely one Guardians spent tireless hours hunting and hoping for. It could even be used as a surrogate weapon to regenerate ammo for the secondary weapon slot by simply switching to the Icebreaker, then switching back to another weapon when your secondary ammo hit zero.

First the Gjallarhorn and now the Icebreaker? It’s a great time to be a Guardian, that’s for sure. Perhaps we’ll see more illustrious weapons from Destiny’s past make their return? Who’s to say. But one thing is for certain, many will be hunting down a new quest or popping an unreal amount of Three of Coins in the coming days.

Also At The Playstation Experience 2016