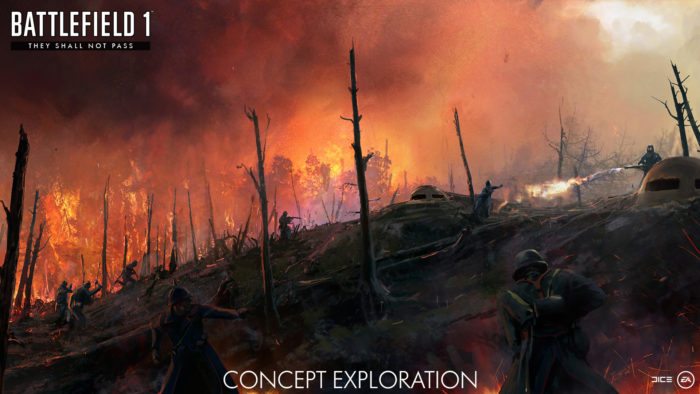 DICE has only just rolled out the latest new map for Battlefield 1 this week, but the studio are hard at work on the game’s first big expansion, “They Shall Not Pass.”

In a blog post on the game’s website, DICE devs Jonas Elfving and Stefan Strandberg offered a few more details about what Battlefield players can expect once the expansion releases in March next year.

According to Elfving and Strandberg, They Shall Not Pass will feature “all-new maps, new weapons, and the new playable French Army faction”, with the entire expansion based on the real-life battles of Verdun, Soissons and the Devil’s Anvil.

“The initial fighting around Verdun quickly transformed villages like Samogneux and entire forests into shadows of their former self.” reads the blog post, which goes on to explain that DICE are hoping to immerse players in the battles of “these initial intense attacks in the cold February of 1916.”

DICE also released a batch of concept art that was originally used to inspire the Battlefield 1 expansion, all of which can be found on the blog post itself.

No word yet on how much the pack will cost, but those who own the Battlefield 1 Season Pass will be able to download and play They Will Not Pass two weeks earlier than everyone else, free of charge.