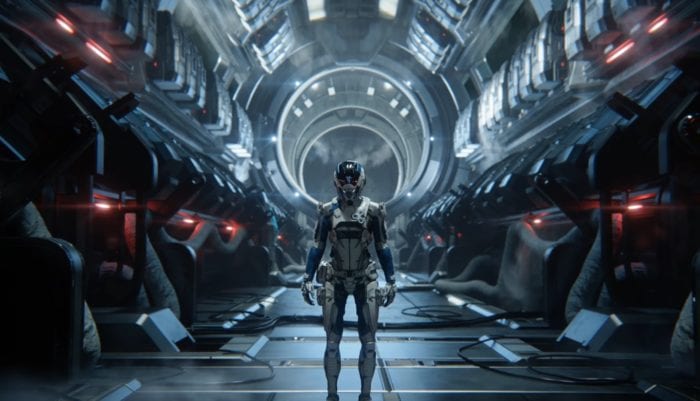 Mass Effect Andromeda has gotten a ton of info today, in celebration of N7 Day. In addition to a brand new cinematic trailer, we got a new video introducing “The Andromeda Initiative,” providing some huge story details. The Andromeda Initiative is also a website that Bioware has created, welcoming you as a new recruit to the project and briefing you on your mission.

The new “Orientation Briefing” features a female character clad in a spacesuit, who says they’re the founder of the initiative. According to this character the project is, “A one way trip.” 600 years from now members of the project will wake up from cryosleep on the outskirts of the Andromeda galaxy, a place rich with resources. Members of this project will be known as “Pathfinders.” Now here’s the big part.

Humanity has created two arks, Hyperion and Nexus, that will shuttle seemingly huge numbers of humanity to Andromeda. On top of this, three other arks have been created that carry other alien races. For a while now fans have speculated on humanity and the galactic races using arks ahead of the Reaper attack, just in case Shepard’s mission failed. This new video shows that is in fact what happened, at least in part. The video ends with the spacesuited character standing next to someone in N7 armor and stating,

“If successful, we have a chance to do the impossible, and create a new future for all humanity.”

Make sure to take a look The Andromeda Initiative’s website, which has some other details and images to look at of the Pathfinder’s armor and equipment, possible hospitable planets, and some info on the main character Ryder. It looks like the website will be updating with new “training videos” at some point as well.

Mass Effect Andromeda is set to release in Spring 2017. You can take a look at the game’s official box art here, and also see the announcement of Ryder’s voice actors.