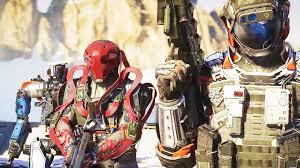 It’s not too long before Call of Duty: Infinite Warfare releases, and to celebrate, Infinity Ward has put out a new trailer. If you remember the classic “There’s a Soldier in All of Us” ads, that’s exactly what you can expect here. Sometimes the world’s troubles are too much, which means that you want to escape from it all. Luckily, there’s video games….and in this case, shooting each other in space. And also throwing black hole grenades at their feet, which is even more awesome.

It’s a funny ad, and it helps that comedy vet Danny McBride is along for the ride. Michael Phelps is there too, but he doesn’t do his now classic face, so it’s a bit of a waste. Plus, Danny steals his kill. Dick move, dude.

Call of Duty: Infinite Warfare comes to the PS4, Xbox One, and PC on Nov. 4. So far, it’s been a good week for live action trailers, since Dishonored 2 revealed theirs during the Walking Dead season premiere.