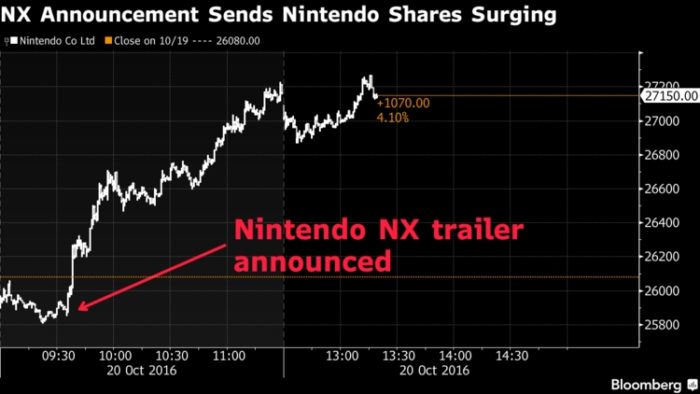 Nintendo’s stocks have added more than $1 billion in market value following the announcement that the company would finally give details on their newest gaming platform, code-named NX. The NX, now known as the Nintendo Switch, was given a first look this morning in a brief YouTube video.

According to Bloomberg, Nintendo shares increased “as much as 4.6 percent” in Tokyo on Thursday. Their stock has been up more than 50 percent this year due to the company’s recent smartphone entries like Miitomo, Pokemon GO, and the upcoming Super Mario Run.

Last July, Nintendo’s shares rose 86 percent after the launch and global success of Pokemon GO. The $17 billion increase in market value had surpassed Sony’s shares, though Nintendo’s shares dropped about 18 percent by the end of the month. The reason for the drop was that Nintendo did not completely own Pokemon GO, and profits from the app would be limited.

Nintendo unveiled the Nintendo Switch by showing off the console, glimpses of The Legend of Zelda: Breath of the Wild and an unannounced Mario game, multiple control schemes, and more in a three minute teaser video. The Switch can be used at home on a television screen or outside as a portable handheld. The hybrid console is expected to launch in March 2017.