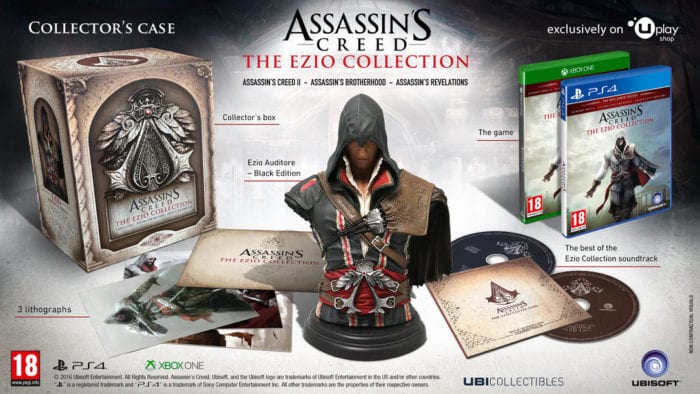 Yesterday, Ubisoft announced Assassin’s Creed: The Ezio Collection for PlayStation 4, Xbox One and PC, and the company are planning to release a collector’s edition of the game for those who want something a little extra special.

“Assassin’s Creed: The Ezio Collection – Collector’s Case” is certainly a mouthful of a product title, but it lives up to its name as a special edition for this remastered trilogy.

The product comes with a statue bust of Ezio donning his black Master Assassin outfit, a trio of exclusive lithographs (one for depicting each game), and “the best of the Ezio collection soundtrack”, which comes in the form of two discs and features a whopping 40 songs.

Also included, of course, is a physical copy of the game itself, and the entire thing is packaged in an exclusive collector’s box, which looks very pretty indeed.

The product is being sold exclusively on the Uplay shop, and will ship on the 17th of November, this year, alongside the standard launch of the game.

You can currently pre-order the “Assassin’s Creed: The Ezio Collection – Collector’s Case” for $79.99 in North America.