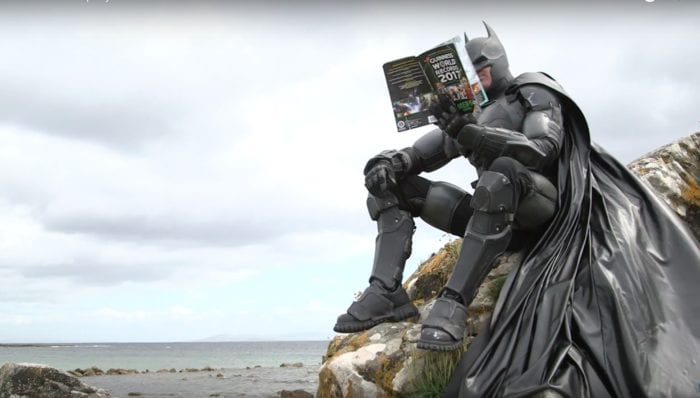 Releasing early next month, Guinness World Records: Gamer’s Edition will feature none other than an incredibly impressive Batman cosplay. Inspired by the suit and tools of Arkham Origins, and with 23 functioning gadgets as part of his suit, Julian Checkley now holds the world record for the most functional gadgets on a cosplay

“I love the suit, I love building it,” Checkley says about Batman in general. A special creature effects expert, he has spent much of his professional and personal life designing and making costumes.

“We finished the suit, and it was looking great, it was fantastic. But we wanted to embellish the suit somehow.” 23 functional gadgets later, it’s fair to say the suit is embellished quite a bit.

Based on the armor-plating look of the Batman suit in Arkham Origins, Checkley’s batsuit “was 3D printed and then moulded and cast in a flexible urethane rubber. The parts were then trimmed, detailed and painted, before being mounted on a specially designed undersuit,” a post on the Guinness Book of World Records site explains. Counting the bat ears, Checkly stands at a Dark Knight-worthy 6″10′ when in the suit.

As for the gadgets however, the full list includes: