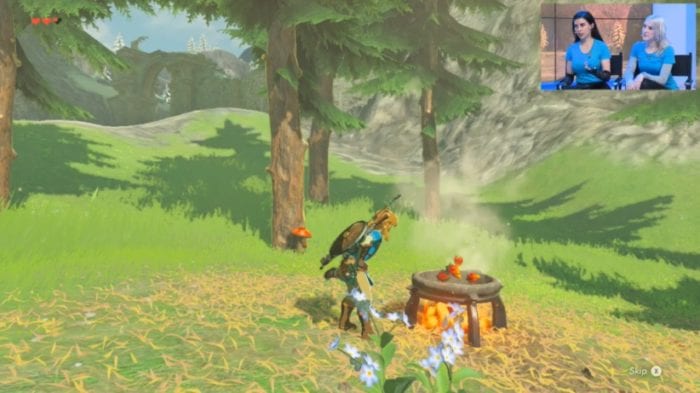 The Legend of Zelda: Breath of the Wild is breaking conventions that the series has built up for over 20 years, and one of the biggest notable changes is the move away from heart containers. Gone are the days of cutting up grass and regaining all of Link’s health. In BotW, hunting and gathering is key to survival. Though, apparently, the hunting part of that equation doesn’t necessarily have to be true.

During Nintendo’s incredibly long Treehouse livestream of Breath of the Wild yesterday, they spent some time diving deep into the hunting and cooking mechanics. Essentially, Link can sneak up on a variety of wild animals and trap or kill them. Animals puff into smoke and become meat that can be consumed for very little health or cooked to heal much greater. But among the wealth of animals to hunt, there’s also a wealth of fruits and vegetables to find in the world.

As it turns out, there’s nothing stopping the player from leaving the peaceful animals alone and simply sticking to gathering mushrooms, peppers, acorns, and apples. They’ll still heal up Link perfectly fine, and can still be mixed and matched with various recipes to create bigger and better meals. It’s a pretty cool touch by Nintendo for those who don’t feel the need to kill the beautiful animals of the world.

What do you think this little detail of Breath of the Wild? Let us know in the comments, and be sure to stay tuned on Twinfinite for a lot more E3 2016 previews, news, and other general coverage.