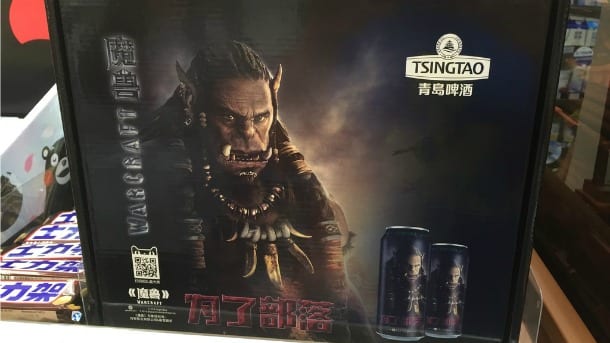 The Warcraft movie may not have done too well at the box office in the West, but it’s been hugely successful in China, reportedly earning more than $45 million during its first day in the country.

It’s no surprise then, that China-based beer producers Tsingtao Beer has launched a new product themed around World of Warcraft.

You can buy a pack of 16 of these special edition beers, with both the box and cans featuring two characters from the Warcraft movie, Durotan and Andoin Luthar.

The beer itself is the 1903 Tsingtao Lager brew, for anyone who knows their beverages.

Though Tsingtao Beer has limited production to domestic sales in China, you currently buy yourself a pack on Ebay from a third party for as low as $20, though stocks appear to be limited.

The product was spotted and captured by a Reddit user on the Collectors Society page.

Other than the marketing art slapped on the front, it looks like the beer offers nothing particularly special or Warcraft-themed, but the product will obviously be available for a limited time only, so make sure to grab your pack now if you’re interested.

World of Warcraft Reveals Burning Crusade for Classic and Shadowlands: Chains of Domination