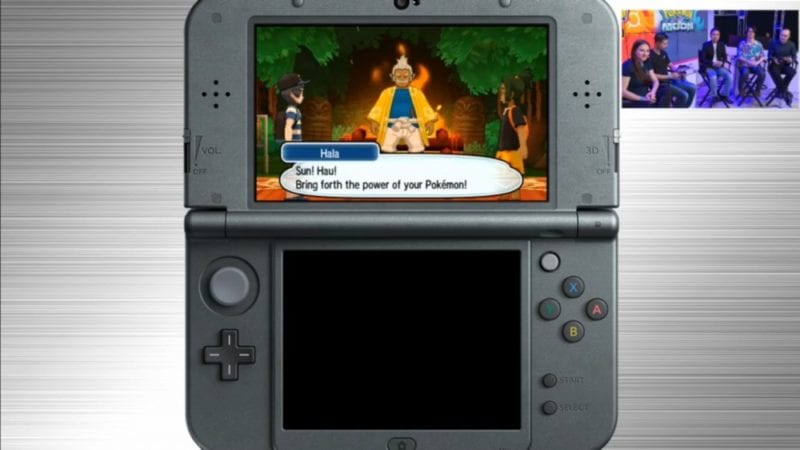 At the Nintendo Treehouse event, Junichi Masuda and Shigheru Omori from Game Freak showcased a whole host of new details, including a live gameplay demo for the upcoming Pokémon Sun/Moon.

First they talked about the Alola region. The Sun and Moon themes signify a new locale that is overflowing with life-force, full of fascinating new and old Pokémon to find and train. Alola is also isolated from the other regions in previous games, and the new legendaries Solgaleo and Lunala were described as emissaries of the Sun and Moon respectively.

During the demo we were also shown a festival dedicated to the deities of the island, in which new trainers are ritualized. The team at Game Freak took trips to Hawaii to research the environment and take inspiration for the game. As a consequence of this the new characters and Pokémon have been adapted for the tropical climate, and given realistic proporitons to enhance relatability.

They also spoke about the new starters, and mentioned how their animations and design had been adapted so that they look cute and are universally relatable, mentioning how the grass type starter Rowlet is green.

The battle UI has also been completely revamped for Sun/Moon. Whilst in battle the camera has been altered so that you can see your trainer behind your Pokémon. Lighting and shadows have also been tweaked so that they are dynamic. Time of day will be reflected inside the battle screen. A dedicated Pokéball button was also shown, so that it’s much easier to catch Pokemon in the wild.

Battle information has also been enhanced, and you can see colour coded stats on screen about the Pokémon you’re facing. The Pokédex will be on the touch screen too, and you will be notified if you haven’t caught the creature you’re battling yet. Once defeated, you will get more information about which abilities are effective against the select Pokémon you’ve beaten, so it will be easier when encountered in the future. Full analogue movement is also utilized whilst walking around the region, and when you are close to a trainer, a shadow will appear on the screen indicating an upcoming battle. There are also unique motions for winning and losing battles, as well as throwing Pokéballs. The new game is shaping up to push the boundaries of the previous titles and provide a new experience to Pokémon veterans and newbies alike!

For more Pokémon coverage, keep it locked here at Twinfinite.