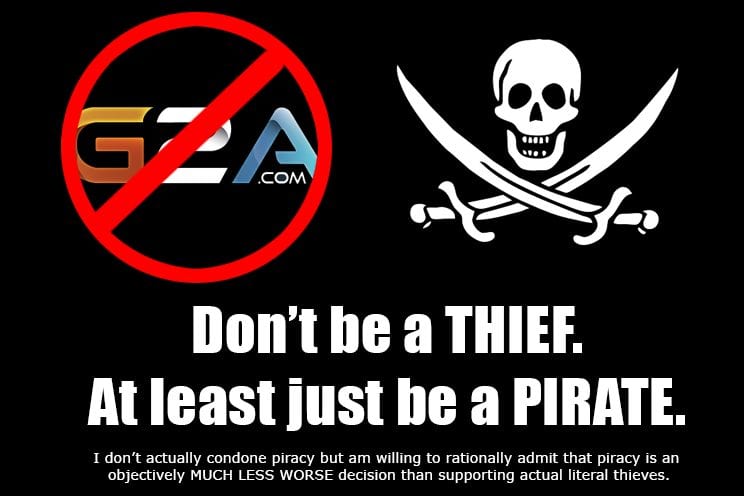 “I never thought the day would come where I would passionately argue that fans should pirate my game rather than pay for it, but here we are.”

Lars Doucet made Defender’s Quest, a tower defense RPG that costs $15 from the developer’s website, a couple dollars on G2A, and nothing on torrenting sites. And frankly, he’d just prefer you get the game for free over purchasing it from G2A.

G2A, an online game code reseller market, has come under fire recently for offering goods suspected to be obtained by fraudulent means. Punch Club and SpeedRunners developer TinyBuild released a statement last week claiming $450,000 worth of their products were sold on G2A, many of which sprung from credit card fraud. Developers big and small have been taking action against the site, but Doucet wants to get real with consumers on the obvious and hidden cost of grey markets.

“To be clear, I don’t agree with or condone piracy,” Doucet states. “But I’m a realist, and piracy is so much less worse than buying from seedy online pawn shops like G2A. If you’re not going to make the best choice, please don’t dive straight into the worst choice.”

Doucet outlines piracy, theft, and legitimate purchases through the Four Currencies model, which evaluates purchasing methods by their monetary cost and psychological costs: the cost of time, cost of effort, and moral cost. Piracy, he argues is less expensive than purchasing from G2A, and here’s some nifty charts Doucet made to visually demonstrate the idea:

Doucet also notes he takes no issue with legitimate third-party resellers, since the original key was rightly bought. You can find his full article on the subject of G2A and piracy here.

“A lot of people like to say ‘Piracy is theft.’ It’s not,” he says. “It’s an infringement of my legal monopoly right to control the distribution of my work for a limited period of time. Piracy is not theft. G2A is theft.”