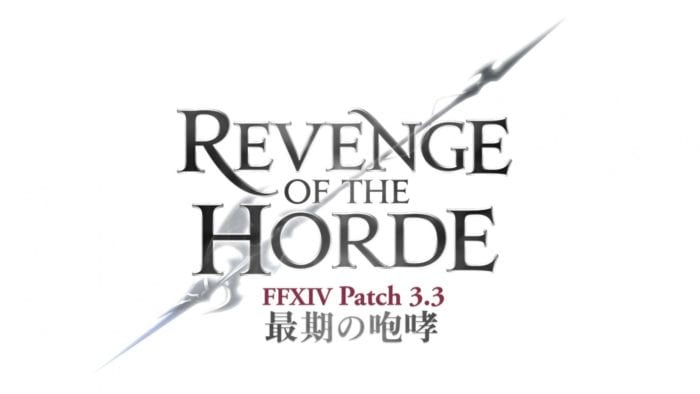 Early this morning on the east coast, Final Fantasy XIV producer Naoki Yoshida revealed via his regular Letter from the Producer LIVE broadcast, the name and some details for the upcoming patch 3.3. The patch, titled Revenge of the Horde, will include the final chapter of the Dragonsong War, which has been one of the major plot lines of the FFXIV story since the launch of its first true expansion, Heavensward.

Presumably, adventurers will finally have to deal with the issue of Estinien and Nidhogg. If you’re fuzzy on the details, Estinien was the Azure Dragoon tasked with defeating Nidhogg and ending the Dragonsong War by force. Your actions in the main Heavensward story line, solved a lot of the issues peacefully (at least in comparison to how it could have gone down) but things didn’t end well for Estinien.

Estinien’s constant use of the Eye of Nidhogg, left him susceptible to the wyrm’s influence, and eventually, Estinien succumbed. Nidhogg was able to use Estinien to fully restore himself with both of his eyes. So despite the peace struck between the majority of Ishgard’s leaders and the dragons, Nidhogg still lurks. He’s at full strength, really pissed off, and has a horde of dragons ready to go to war for him. Hence patch 3.3’s title, Revenge of the Horde.

With 3.3 winding down the Dragonsong War, FFXIV players might be wondering what’s next. Believe it or not, it’s time to start thinking ahead to the next expansion. If this cycle is at all similar to the Realm Reborn cycle of patches, expect patch 3.4 and on to start building up the story line to 4.0, just as Ishgard was slowly teased out through the 2.X series.

Patch 3.3 will also include, as usual, dungeons (with HM Hullbreaker Isle being one of them), a new trial, and the next step of the 24-person raid. Also on the way is an additional Frontlines map, a new type of dungeon designed around treasure maps, and a bizarre collaboration with Yo-Kai Watch which will feature a mount, and some weapons that are likely for glamour. For the full details, visit the Letter from the Produce LIVE Update Page on the official forums.

While the next expansion is confirmed to be in existence and under development, specific details on what it will entail are still tightly under wraps.