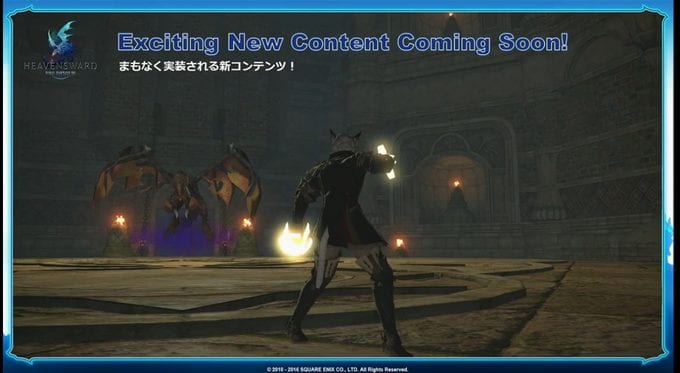 This Saturday during PAX East 2016, Square Enix held a panel for Final Fantasy XIV and revealed a new activity that Final Fantasy Tactics might find exciting. The first “Deep Dungeon” called Palace of the Dead, is a bottomless pit filled with undead enemies. Deep Dungeon in FFXIV is an obvious reference to the difficult and long optional dungeon found in FFT called Midlight’s Deep, which also known by many as Deep Dungeon. To be clear, the activity type is called Deep Dungeon, and this specific instance of it is called Palace of the Dead.

Palace of the Dead will feature randomized dungeon floors that sap the strength of adventurers. Item level benefits will be negated, and players will need to rely on their skill and items found in the dungeons to increase their power. Palace of the Dead will be located in the Black Shroud. In addition, there’s going to be a score ranking system added to it in the future after its initial release which should please perfectionists/speed runners.

You can tackle Palace of the Dead either solo, or with any combination of party members up to four. Arguably, that’s the most interesting part about Deep Dungeon. Considering so much of FFXIV is rigid and married to perfect “MMO Trinity” balance, it would be great if Deep Dungeon encouraged some more creative party makeups like what was seen in Final Fantasy XI. Duty finder and perfect parties are great and all, but FFXIV could definitely use a shot of player driven creativity.

Speaking of Final Fantasy XI, if there are any former/current players reading this, Deep Dungeon, at least going off of how of Square Enix is describing it, has a strong Nyzul Isle/Salvage vibe going for it. Like Salvage, you’ll need to find items to power yourself back up, and like Nyzul Isle, you’ll progress through different areas and eventually come up against a boss every few floors. If you have fond memories of the Treasures of Aht Urghan days, you might be in luck with Patch 3.35.

This writer right here is all for anything that’s not another dungeon, midcore raid, or hardcore raid, so hopefully Palace of the Dead/Deep Dungeon winds up being successful when it is released in Final Fantasy XIV with Patch 3.35.