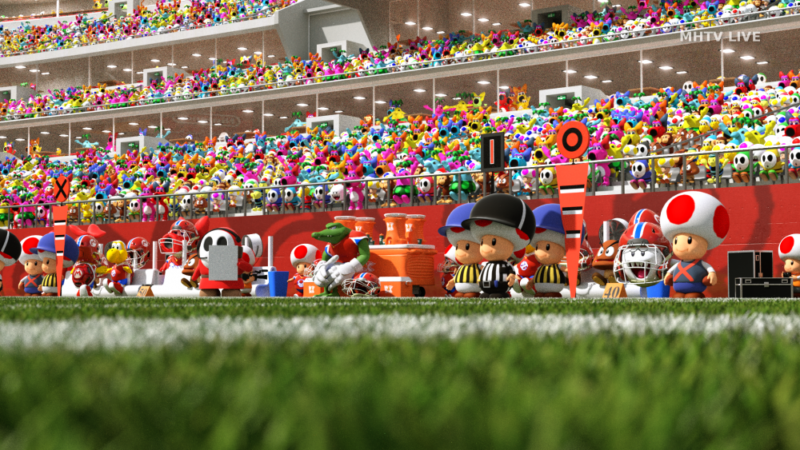 It might come as a surprise to you that among the vast library of Mario Sports games that have released over the past several decades, not a single one has taken on American Football. Why? Well, quite frankly, there’s never been much of a reason to. As the name suggests, only America plays American Football, so there’s no guarantee that a game with Super Mario as a quarterback would sell well outside of the United States, if at all. Nevertheless, maybe that shouldn’t stop them, if the following concept art is any indication of what that game could look like.

Reddit user SyBro revealed his latest project, concept art for an idea of what a new Super Mario sports game could look like if Nintendo decided to choose football as the latest sport. Suffice to say, it looks marvelous.

While the video game world has no shortage of American football games, with the annual influx of Madden titles, there has been a lack of the wackier take on the sport. NFL Street and Backyard Football used to sate that hankering for a more stylized version of the sport, but they’ve been absent from the scene since the PlayStation 2 era.

As such, SyBro is onto something. According to him, the game could be fittingly titled Super Mario Huddle. The game essentially works with you choosing your desired Nintendo Star Character as the quarterback. Each character could have their own unique skill that they may unleash when the time is right, similar to Mario Power Tennis.

The attention to detail is astounding; Yoshi even has a personalized helmet.

This fan has even gone through the motions of coming up with the various modes for the game, which would include a Classic Arcade-style 11v11 format, an Item-based 6v6 format, and even co-operative play with a second player choosing another Star Character to play as the Tight End.

SyBro specified that the GameCube controller would be preferred.

Seeing the beautiful artworks SyBro has rendered only makes us wish Super Mario Huddle would become a real game. While the latest Mario Tennis game was a bit of a disappointment, it could have just been a bad play on Nintendo’s part. The company has a history of publishing some phenomenal sports games, so we know they still have it in them.

Whether or not they decide Super Mario Football is the way to go next is anyone’s guess. Honestly, the little Goomba wearing a football helmet is everything I never knew I needed in my life.