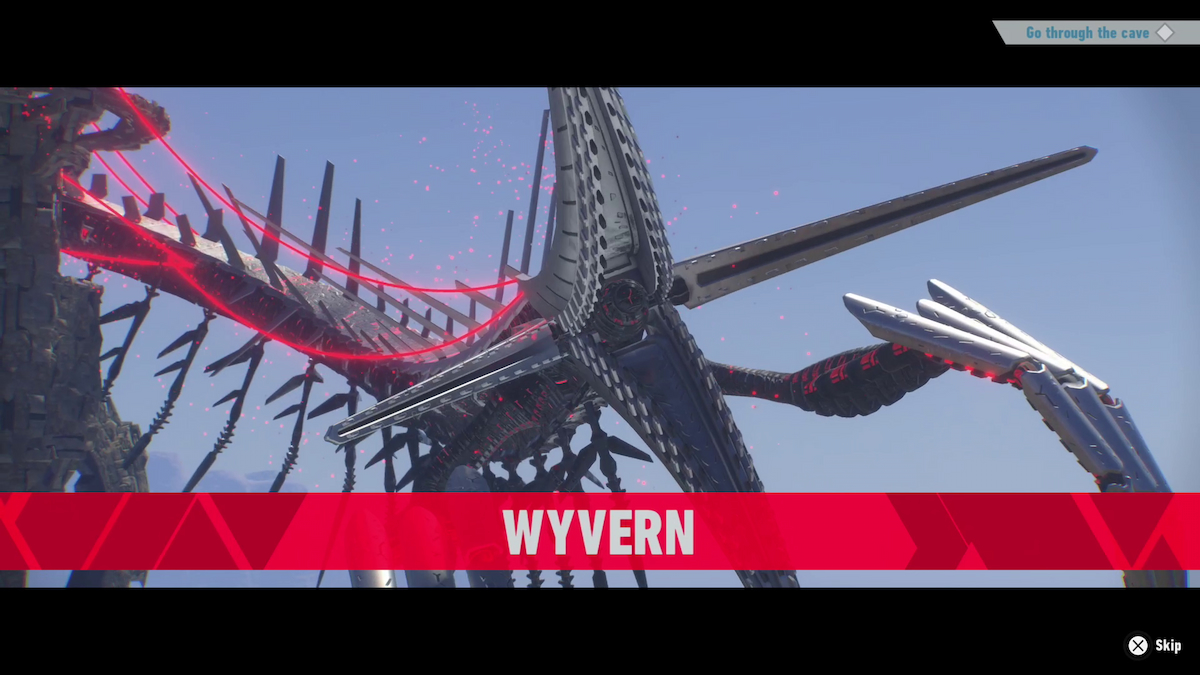 Wyvern is the second Titan fight Sonic will have to test his mettle against. It’s the first fully airborne boss as well, which means things work a bit differently than they did before. If you’re looking to get a few pointers regarding how to defeat Wyvern in Sonic Frontiers, look no further.

Like Giganto before it, the encounter with Wyvern also requires Sonic to reach the chaos emerald at the Titan’s head before the battle can start in earnest. If you’re looking to get things started as quickly as possible, all you have to do is head to the tower in the distance and begin your ascent.

If you’re looking to nab some more rings before transitioning over to Super Sonic, though, there’s a brief platforming section that can be found in the water to the left of the tower. At its end is a platform with 110 rings.

Regardless of whether you take this side path or not, you’ll still have to ascend the tower at the far end of the arena. Be sure to keep an eye out for alternate paths to make the trip that much quicker.

Once you’ve reached the top of the tower, all that’s left is to stand on the metallic platform to the north and wait for Wyvern to fly by. Once he’s close enough, a white triangle will appear, denoting that you’re able to send a homing attack his way, which will immediately play a cutscene and throw you into the next part of the platforming phase.

This segment sees Sonic running down a digital red pathway that follows Wyvern’s movements. As there’s no way to speed this section up, it’s simply a matter of following the path and boosting as often as possible. The two things you have to watch out for are the path abruptly ending and the projectiles Wyvern will fire to throw you off.

The former can be dealt with by homing attacking the spinning red lasers leading to the rest of the path, while the latter can be sidestepped in a manner similar to the Squid Guardian fight on Kronos Island. The projectiles can sneak up on you, so if you hear Wyvern fire them off, be sure to prepare to switch lanes to avoid them.

Once you reach the end of the path, Sonic will be automatically launched onto Wyvern’s back, leaving the chaos emerald ripe for the taking.

From the get-go, it’ll be clear that Wyvern’s fight functions differently from Giganto’s with regard to Super Sonic’s movement. Most of it is largely automated, with Sonic keeping pace with the Titan as it continuously flies around the arena. This means your primary focus on this fight will be keeping track of the various attacks Wyvern will throw at you.

Shortly after the fight begins, Wyvern will launch a barrage of missiles towards Sonic. Once you see these, all you need to is hold down the parry buttons in order to deflect one back at Wyvern. When the missile meets its mark, Sonic will rush forward to Wyvern’s head.

At this point, the boss will perform a serpentine animation that ends with its claw raised high above itself. The solution to this is the same: hold your parry. Once the attack connects, Wyvern will be sent spinning. This is your cue to deal as much damage as possible.

As with Giganto before, the most important aspect of dealing heavy damage to the boss is to prioritize using as many of the skills Sonic earned from the skill tree as possible rather than the regular attack combo. If you can activate Phantom Rush (easiest with the Sonic Boom skill), the extra damage will come in handy for getting to the next phase.

It’s vitally important to stay on your toes, though, as Wyvern will coil itself up once again while you’re dealing damage (pictured above). As soon as you see this, react with yet another parry, and a button prompt will appear, allowing Sonic to deal heavy damage through a cutscene.

After this point, the first phase loops until you lower Wyvern’s HP to halfway, so keep the above in mind and head to the next section when the cutscene plays.

Wyvern’s second phase begins with the Titan launching rings of lasers from his back, but these are essentially negligible as far as the fight itself is concerned. On a similar note, your game plan for this phase is to, again, return the missiles Wyvern launches right back to it.

This time, however, Wyvern will attack twice in quick succession after Sonic rushes to his head—one for each claw. You’ll have to parry both attacks successfully in order to open Wyvern up for damage, but the same strategies in the prior phase will steer you in the right direction.

At around 25% HP, a cutscene will play, showing Wyvern bending into a circle and firing even more missiles at the blue blur. This precedes a quick time event that will require you to press a button when the white line is within the red circle, similar to the fishing minigame.

From this point on, you’ve seen every surprise the Wyvern fight will throw at you. As you deal damage, it’ll regularly coil back and require you to parry its attacks. Once there’s only a sliver left, Sonic will have to input another timed QTE, succeed in a button-mashing sequence, and then input a final QTE to dispatch the Titan for good.

Good work! Enjoy the cutscene and get ready to dive headfirst into the next Starfall Island.

Now that you’ve learned how to beat Wyvern in Sonic Frontiers, you may want to read more of our coverage. If that’s the case, be sure to check out our ranking of the top five skills. If you’re still looking to earn more powerful abilities, why not refresh yourself on how to earn skill points?