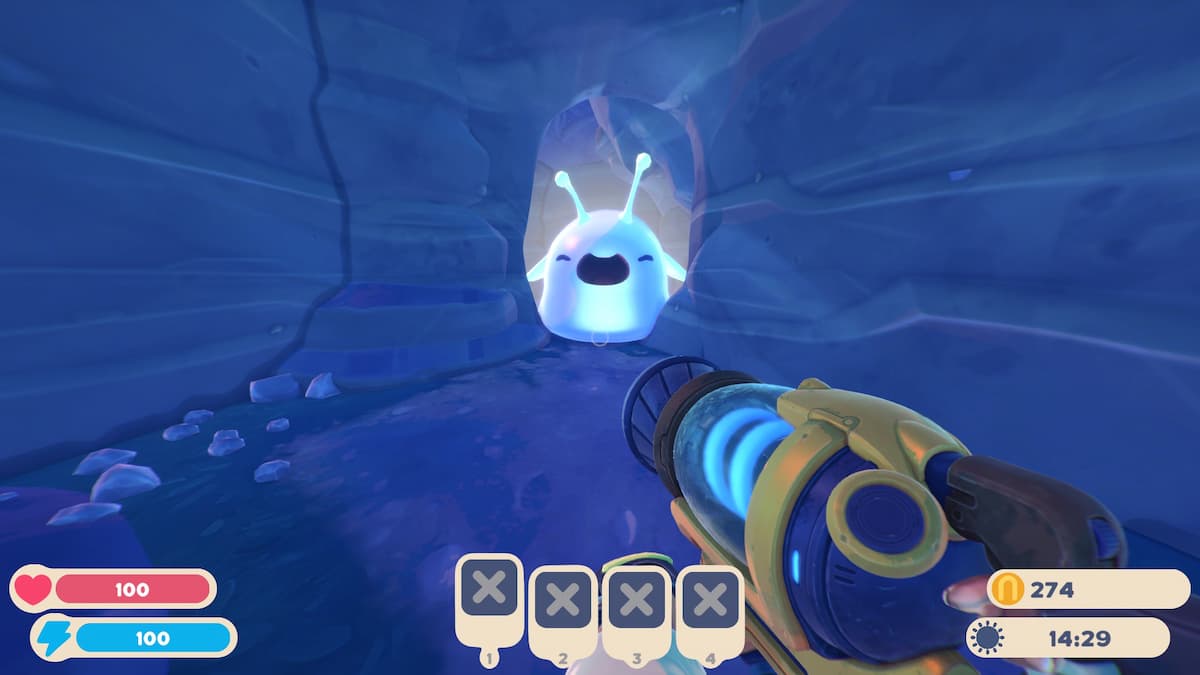 Slime Rancher 2 offers a unique and cute adventure and, well, a ton of slimes. These slimes are your ooey gooey companions and what the entire gameplay loop centers around. While you are out exploring you may come across a big immobile slime. These are Gordos; they block the passages to hidden areas, new islands, and unique treasures and lore. If you’re curious as to where all these big guys are then look no further as we show you all of the Gordo Slime locations in Slime Rancher 2.

Where Are All the Gordo Slime Locations in Slime Rancher 2?

Here are all the Gordo Slime locations in Slime Rancher 2:

There are three Gordos in the Rainbow Fields. These are the Pink Gordo, the Phosphor Gordo, and the Cotton Gordo.

Pink Gordo: This guy is tucked into a recession between two cliffs. He’s pretty easy to find and sitting on a geyser that leads you to the device to unlock the Ember Valley.

Phosphor Gordo: He’s tucked away close to home. Simply head out of the conservatory towards where your boat is docked. Keep running down the path and keep your eyes to the right until you see the little cave he is tucked into. He blocks the path to a treasure chest.

Cotton Gordo: Head southeast from the refinery link and he will be hanging out on a hill. He blocks the cave that houses the switch to reach Starlight Strand.

There are five Gordos in the Starlight Strand. These include the Honey Gordo, Ringtail Gordo, Angler Gordo, Flutter Gordo, and the Hunter Gordo. Keep in mind that to reach the south-eastern Gordo Slimes you will need a jetpack.

Honey Gordo: The Honey Gordo overlooks the first area where you see Honey Slimes. He’s opposite the waterfall way up on a ledge. If you don’t have a jetpack you can get to him by circling to the backside of the cliff he’s on and climbing up some mushrooms. He blocks the entrance to a cave with some treasure pods as well as a couple of shortcut doors.

Hunter Gordo: In the area with the large locked door follow the path to the left as it hugs the cliff wall and leads down to a cave with this big fellow blocking it. He’s guarding a cave with a treasure pod as well as a locked door.

Flutter Gordo: In the area with the wall of ruins he sits firmly on a platform in front of a giant rainbow crack. Flutter Slimes can only eat Moondew Nectar, which you can’t farm, so make sure you pick up as much as you can while you explore to feed him. He blocks a cave with a research drone and a treasure pod.

Ringtail Gordo: Ringtail Slimes are only active at night, so when night falls just head east from the flutter gordo and follow the path up. He sits on an alternate portal to the Starlight Strand that makes coming back to this section way more convenient.

Angler Gordo: If you head further down the path past the Ringtail Gordo you’ll see a massive opening in the ground. Drop through this hole and you should land right on the Angler Gordo’s head. He blocks a water spout that helps you travel between the lower and upper layers of the area.

The last third of slime rancher has five more Gordo Slimes for you to find. These are the Tabby Gordo, Rock Gordo, Crystal Gordo, Boom Gordo, and Batty Gordo.

Boom Gordo: He sits in a huge wall in the westernmost portion of the Ember Valley. Behind him are two treasure pods, one of which has a strange diamond, and a research drone.

Batty Gordo: This one sits in the lowest section of the cave system within the lava-covered mountain. He blocks a shortcut that leads out to the lava fields to the west.

Crystal Gordo: When you hit the open area with a tower. Take one of the geysers to the upper area into the cliff and follow that until you exit a cave with another geyser inside. You’ll see the big guy to your left on a platform. He covers a geyser that leads to a small hidden area with some resources and an easy shortcut back to the entrance.

Tabby gordo: Remember the cave that has a geyser in the center? This time ride the geyser up and jetpack to pop out of the ceiling. Once there hug the wall to the right until you see the tabby gordo hanging out on a platform. He blocks the alternate entrance to the Ember Valley.

Rock gordo: On the way into Ember Valley keep your eyes open to the right cliff walls. You should find a small passage that leads into the Rock Gordos cave. You’ll need three Boom Plorts to open a door that leads up to where he sits. He covers a geyser that takes you to a treasure pod that has a jetpack upgrade material.

Finding and feeding all these Gordo Slimes was super fun and incredibly worthwhile. Hopefully, this guide will help you discover them and lead you to find all of the current secrets in Slime Rancher 2. If you’re curious about the original Slime Rancher, we also have tons of guides up for that as well.