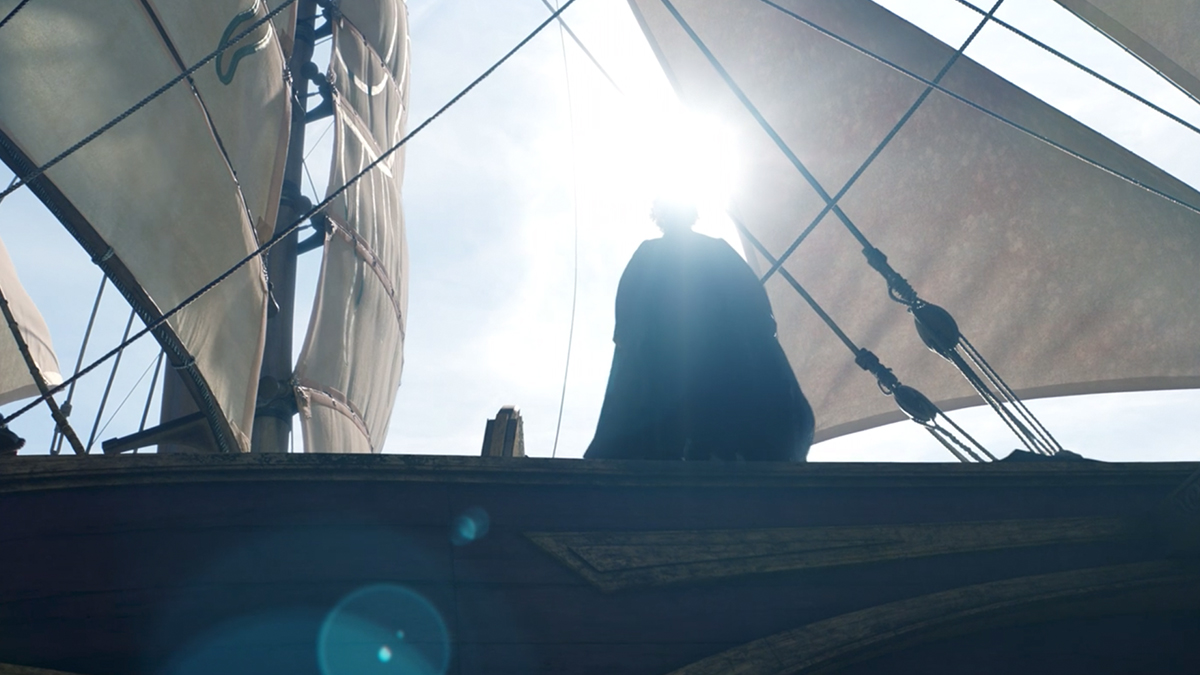 If you’re wondering who finds Galadriel and Halbrand in The Rings of Power episode 2, here’s what you need to know.

The very last scene of episode two from LOTR: Rings of Power shows Galadriel and Halbrand barely alive as they float on their makeshift wooden raft. Their situation looks hopeless, until a silhouetted figure shows up and finds them. A cliffhanger indeed, audiences are left wondering who this mysterious figure might be.

A quick recap of their situation has Galadriel lost at sea since she refused to go with her fellow Elves earlier into the Undying Lands. Elrond had convinced her to give up her vendetta against Sauron and spend an eternity of peace back in Valinor. Instead of proceeding with the boat and her fellow Elves into the light, she failed to resist her compulsion to remain behind and pursue Sauron. After jumping ship, at the end of episode one, we find her desperately swimming at sea in episode two.

Shortly after, she comes across a group of humans barely surviving on salvaged wreckage from a ship. They’re all attacked by a giant sea serpent and most them are devoured. Galadriel survives with the help of one of the men, Halbrand. During their conversation, he explains that he fled his home in the Southlands after orcs attacked it. An incoming storm interrupts their exchange and they both prepare to take the brunt of it.

Who Found Galadriel and Halbrand in The Rings of Power

Barely alive, Galadriel and Halbrand lie unconscious on their salvaged raft. As Galadriel slowly regains consciousness, the bright sunlight shining upon her face is blocked by a shadow. Looking up, she sees the silhouette of a sailor on a ship. Based on clues from the Amazon trailer and the lore from J.R.R. Tolkien’s books, the most convincing conclusion is that this sailer is Elendil. There are two major clues that lead us to believe this.

First, detective work from the trailer and the official movie credits proves that Elendil has been cast. This is crucial for the story since Elendil is a Númenórean sailor and the father of Isildur. Fans will already know the historical roles both these characters play in the novels and the LOTR-adapted movies.

Secondly, Númenór is an island in Arda located between Middle-Earth and Aman. This is important because Aman is where the realm of Valinor is located, home to the Valar. Geographically, it would make sense that a sailor from Númenór would happen upon Galadriel since she was on her way to the Undying Lands which is the realm that Aman belongs to.

After Númenór’s downfall, Elendil led his people to Middle-Earth where they established Gondor and Arnor. He became the High King of the Dúnedainn and ruled until he was slain in Mordor by Sauron. Before then, Elendil and his son Isildur united each of their armies with the Elven High King Gil-galad and formed the Last Alliance of Elves and Men against Sauron. Elendil was also known as the Tall or the Fair which was described in the LOTR books as being 2.5 rangar or roughly 7’11 which made him the tallest Númenórean ever. Although this trait might not carry into the Rings of Power based on what was shown, it will be interesting to find out.

Now that we have established two key elements that prove the silhouetted character is Elendil, all we have to do is wait and see what happens in LOTR: Rings of Power episode 3 to know the truth. That’s all you need to know about who found Galadriel and Halbrand in The Rings of Power. Be sure to check out the rest of our coverage on the show, including who the stranger is from the fireball, what a Harfoot is, and how Finrod died.