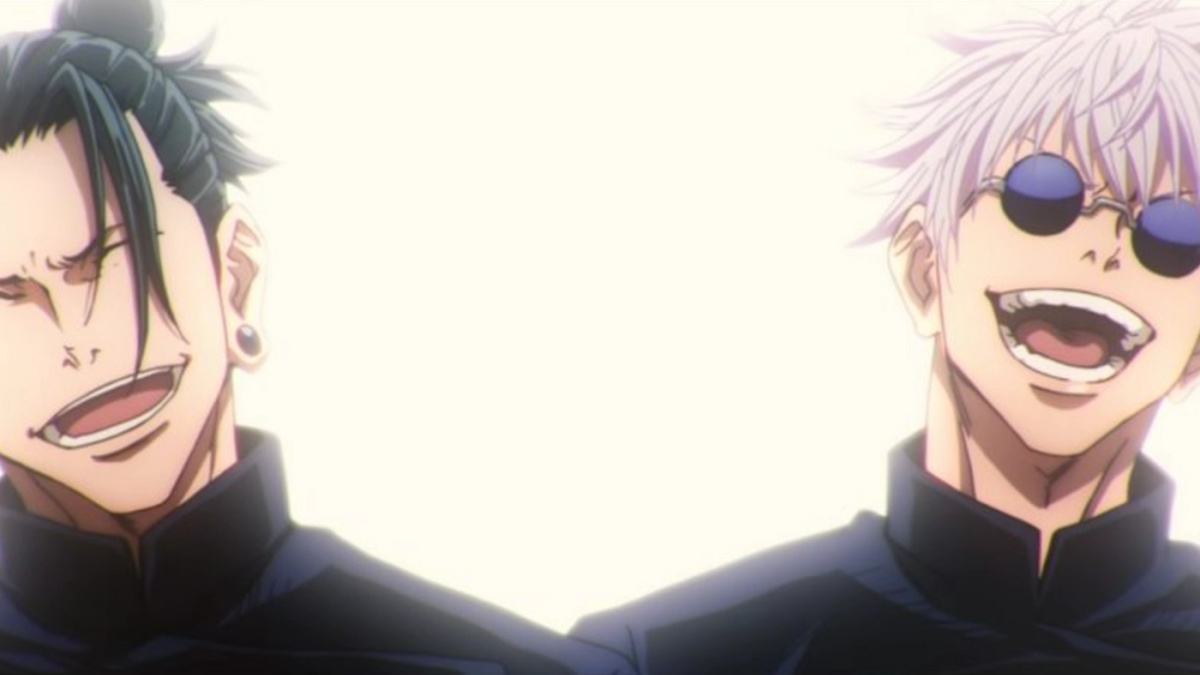 If you’re like most Jujutsu Kaisen fans, the prospect of seeing Satoru Gojo and Suguru Geto together in Jujutsu Kaisen 0 was likely a big selling point. After all, both are the powerhouses of their respective factions and prodigies of the Jujutsu Sorcerers, capable of leveling entire armies with their unique abilities. Seeing as how the two don’t face off directly during the film though, you wouldn’t be blamed for wondering: Is Geto stronger than Gojo in Jujutsu Kaisen, or is it the other way around?

We were curious as to what the answer was ourselves, and after doing some research, we’ve found some potential answers. Do be warned, though, that we’ll be digging into material from the Flashback arc and the Shinjuku arc for information, meaning you’ll need to be up to at least the end of the Shinjuku arc if you don’t want to be spoiled by this article.

Is Gojo Stronger Than Geto in Jujutsu Kaisen 0?

It should be made clear right away that in almost every situation, Gojo would annihilate Geto in a straight-up fight in Jujutsu Kaisen.

This is because Satoru Gojo is basically a MacGuffin of a character. Hailed as the strongest Jujutsu Sorcerer of all time, he’s capable of manipulating space however he sees fit through his Limitless Cursed Technique. He can keep enemies from ever getting close to him, manipulate an attack’s trajectory before it hits him, and otherwise control where any given object or matter is in relation to him.

Even if an enemy manages to damage him, he’s capable of healing himself using Reversed Cursed Energy. This is how he survived a mortal wound from Fushiguro Toji, and can bounce back from even the most deadly wound in an instant.

Topping all this off are his color-coded techniques. Each one uses his manipulation of space to damage his enemies, whether that means firing off a repulsive blast of force or crushing opponents by manipulating the attraction of gravity to portions of their body. The worst of all is his Hollow Purple, which forces opposing spaces to collide for a beam attack that can obliterate any matter it touches.

When all of this is taken into account, there’s all of two or three characters who wouldn’t immediately be decimated by him. Geto barely manages to squeak into this group on the best of days, and otherwise wouldn’t stand a chance.

Is There Any Way for Geto to Beat Gojo?

If Geto and Gojo were to engage in a more indirect fight though, Geto’s chances would rise considerably thanks to his abilities and planning skills.

Based on what has been revealed about Geto’s Cursed Technique, it’s generally understood that Geto’s attacks are as powerful as the Curse he uses to unleash them. For example, if he were to use Mahito’s Soul Manipulation technique, it would be just as destructive as if Mahito used it himself.

Likewise, there’s his ultimate attack to consider. Whereas his Domain Expansion still hasn’t been revealed at this time, he does unleash his Uzumaki technique during his fight with Okkotsu Yuta. This attack fires off a powerful blast which is made more powerful based on how many Curses he gives up control of and destroys to fuel it. Should the proper number of curses be used, this attack could theoretically be powerful enough to destroy anyone.

With all this in mind, Geto could theoretically take on and defeat Gojo with enough preparation time. Granted, he’d need to gather thousands upon thousands of curses to let off an ultimate attack capable of killing Gojo, but said attack would be enough to wipe Gojo away in an instant if it landed successfully.

And that’s not even factoring in the use of cursed objects. As shown in the conclusion of the Shinjuku arc, objects like the Prison Realm can seal Gojo indefinitely, making his near infinite power inconsequential. If Geto had access to such an object, he could very well defeat Gojo in the blink of an eye.

Do Geto and Gojo Ever Fight in Jujutsu Kaisen?

Or at least, he could if not for his ultimate fate: Following the events of Jujutsu Kaisen 0, Geto is killed by Gojo.

This isn’t through some climactic battle between the two though. Following Geto’s fight with Okkotsu Yuta, Geto is left mortally wounded and unable to defend himself when Gojo finds him. As a result, he can’t do a thing when Gojo finishes him off, intent on being the one responsible for putting an end to his former friend.

Though Geto’s corpse is later revealed to be resurrected and controlled by Kenjaku, it’s never as strong as Geto could have been using his own body. As such, it’ll never be possible to see the two Jujutsu Sorcerers face off properly. It’s a bit of a bummer, but also for the best given the role each is supposed to fill in the larger series.

Hopefully this cleared up whether or not Geto is stronger than Gojo in Jujutsu Kaisen. For more on the series, check out the related articles down below. We’ve also got plenty of other anime content to check out, including lists of the best anime senseis and the best anime rivalries.