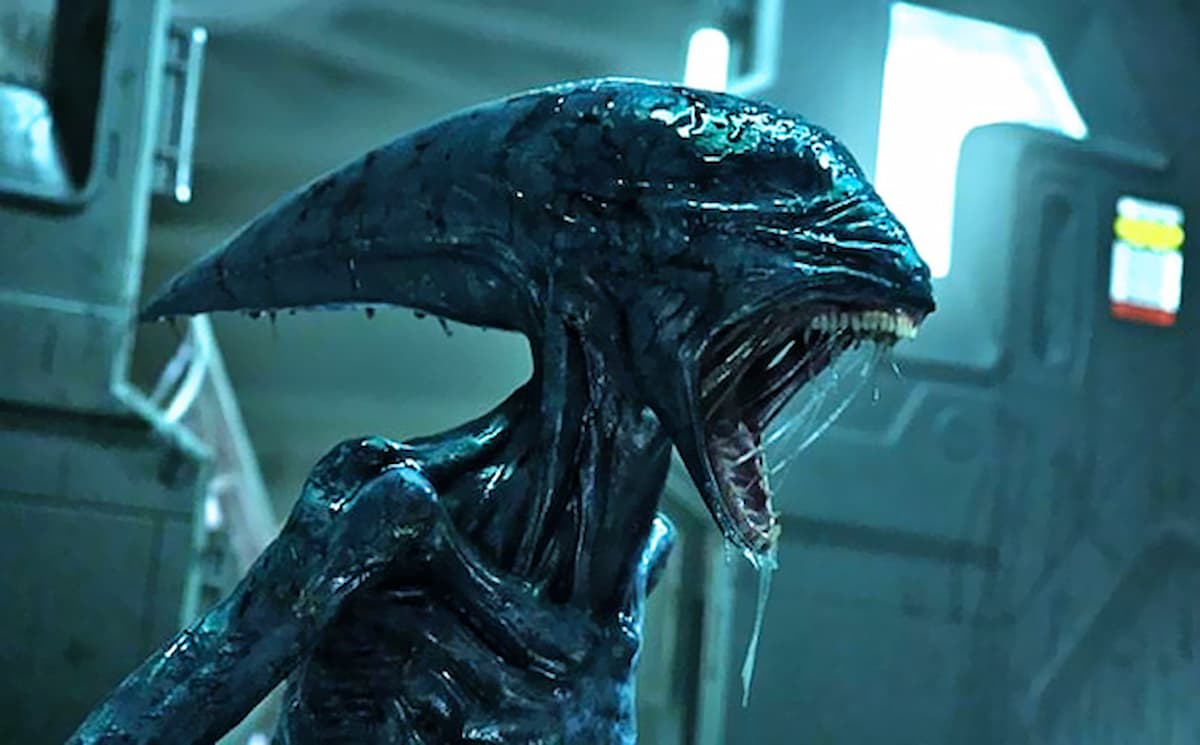 In space, no one can hear you sh*t your pants. Yep, I know that’s not exactly how that tagline really goes, but I thought that lede would best sum up why we’re here today. Because, that’s right, we’re here to discuss the top 10 best scary Alien movies ever. Are you ready, nerds sci-fi fans? Let’s get started, shall we?

You see, not only is the monster design eye-catching and impressive, thanks to a certain artist called H. R. Giger (you may’ve heard of him?), but the cast is full to the brim with Hollywood legends. From Reservoir Dogs’ Michael Madsen to Rogue One’s Forest Whittaker to veteran stage actor and Sexy Beast star Ben Kingsley to Spider-Man 2’s Alfred Molina, there’s a star-studded cast waiting for you to say, “Oh, I didn’t realize he was in that!”

And that’s all without mentioning the supermodel extraterrestrial siren at the center of it all, Natasha Henstridge, who would go on to star in two of the following far less beloved sequels. Seriously, if you ever wanted to know the definition of the term: diminishing returns, Species is the perfect example of this.

What do you get if you throw Silent Hill‘s Radha Mitchell, The Fast and the Furious’s Vin Diesel, The Thing‘s Keith David, and Olympus Has Fallen’s Cole Hauser into a sci-fi action-horror flick together? Why David Twohy’s criminally underrated Pitch Black, of course!

Granted, the monster designs may be pretty weak sauce, but the tension and atmosphere is on-point to deliver enough thrills and excitement to land a spot on this list. Plus, it was also culturally resonant enough to spawn a couple of really decent video game tie-ins – The Chronicles of Riddick: Escape From Butcher Bay and Assault on Dark Athena – so it stays, got it?

When I was younger, I found Signs really, really boring thanks to its painfully slow buildup. But now I’m older, I appreciate it way more for the marvelously inventive and hauntingly tense alien invasion thriller that it truly is. Indeed, I can safely say Signs is one of M. Night Shyamalan’s best films from a back-catalog filled to the brim with classics… and, umm, The Happening.

Centering on a small family in Pennsylvania, Signs tells the eerily believable tale of Father Graham Hess (Mel Gibson), whose farm suddenly becomes a prime location for mysterious crop circles. Add an escalating sense of dread, terrific turns from a star-studded cast including Gladiator’s Joaquin Phoenix, and a signature Shyamalan twist that’ll pull the rug from right under you, and you’re left with a modern, albeit understated, sci-fi classic.

Written by Scream’s Kevin Williamson, there are a lot of similarities between this pic and Wes Craven’s hugely popular slasher series in both tone and style. Action sequences largely focus on cat-and-mouse running and hiding, and the identity of the alien queen is a mystery up until the very end of the film.

Plus, that’s all without mentioning The Faculty’s stellar cast, which comprises of The Lord of the Rings‘ Elijah Wood, Black Hawk Down’s Josh Hartnett, Terminator 2‘s Robert Patrick, and The Fast and the Furious’s Jordan Brewster. Pretty underrated? Yep. Totally essential? Indeed.

The found footage format found a lot of popularity in the late nineties thanks to The Blair Witch Project. However, the sub-genre was catapulted into the limelight once again in the late noughties by Matt Reeves’ grittily believable portrayal of a modern-day New York that’s being secretly invaded by a hostile otherworldly presence.

Like many of the best found-footage shockers out there, Cloverfield doles out the scares in meticulous drip-feed fashion and doesn’t spend too much camera time revealing the physical forms of its monsters, which ultimately leads to a much more effective creature feature.

Not only did Cloverfield help put Matt Reeves on the map (he went on to direct a little movie called The Batman), but it also spawned a couple of franchise spin-offs: 2016’s decent-yet-overlooked 10 Cloverfield Lane and 2018’s lackluster The Cloverfield Paradox.

Speaking of otherworldly invasions, War of the Worlds wants to introduce itself. Steven Spielberg’s grounded adaptation of H.G. Wells’ seminal source material is another alien incursion, but this time… they were here all along. (Dun, dun, duuun!)

Starring Hollywood A-lister Tom Cruise, along with award-winning I Am Sam actress Dakota Fanning, The Lord of the Rings‘ Miranda Otto, and The Shawshank Redemption’s Tim Robbins, War of the Worlds is a brilliant sci-fi adventure that sharply focuses on a family in crisis, while the world around them is falling apart, too.

With superb acting across the board, a wonderfully atmospheric John Williams score, some chilling set-pieces, and some exceptional cinematography, War of the Worlds simultaneously excels as both an epic disaster film and a more personal familial drama.

Trying to find another person who enjoyed Ridley Scott’s notoriously divisive Prometheus is as insurmountable a task as discovering a living organism in the vast expanse of space. But they exist, promise! In all seriousness, I consider Prometheus to be an oft-overlooked sci-fi gem.

Even to all the detractors out there, I hope we can all agree that Scott’s prequel is a thematically complex piece of sci-fi horror filmmaking that asks big, existential questions: Where do we come from? Who created us? Why were we created in the first place? Clearly, Scott’s deep, cerebral enigmas are the centrifugal force that propels the movie forward, and it’s hard not to at least respect the British director’s sheer ambitiousness with this project.

After all, this ain’t no cookie-cutter Alien clone like 2017’s decent-yet-uninspired Life horror flick. Instead, Prometheus is something new, something fresh, and something noticeably bold in narrative, style, texture, tone, and delivery.

We’ve been lucky enough to have had a terrific Predator prequel makes its way to our small screens recently, but if we had to pit Prey vs. the OG killing machine from the ’80s, John McTiernan’s original would just about edge it.

Yes, not only does the machismo, gun-toting classic actioner features an iconic turn from the Austrian Oak himself, but its fantastic visual effects still hold up, even to this day. Meanwhile, Alan Silvestri’s emblematic score is a highlight, and the chemistry between the platoon at the heart of the film is authentically lewd and brimming with banter. Like, what the hell even is a sexual Tyrannosaurus anyway?

In short: if you’re one of the three people in the world who has never seen Predator yet, you need to go and remedy that, pronto!

John Carpenter’s reconceptualization of Christian Nyby’s 1951 sci-fi classic The Thing From Another World hews closer to the original source material’s novella, Who Goes There? by John W. Campbell Jr, in that it deals with themes of assimilation and hiding in plain sight, as opposed to a big plant-like critter picking off a bunch of scientists one by one.

Centering on a research team based in Antarctica who inadvertently stumble upon an ancient alien lifeform that can emulate the physical appearance of Earth-based life, The Thing is a thrilling sci-fi horror pic that’s chock-full of paranoia, claustrophobia, and, urm… spider-heads with lizard-like tongues. *shudders*

Boasting an incredible ensemble cast featuring Kurt Russel, Keith David, Wilford Brimley, Charles Hallahan, and David Clennon, some of the finest practical effects ever put to film, and an unsettlingly atmospheric score from award-winning composer Ennio Morricone, The Thing is a lightning in a bottle feature that’ll stay with you long after the final credits have rolled.

While Alien may be the oldest film on this list, make no mistake: it still looks absolutely phenomenal, even by today’s standards. Yes, Ridley Scott’s original pic is a sci-fi masterpiece that blends plausible science fiction with chest-bursting body horror.

Bolstered by one of the coolest monster creations ever conceived (thanks to the nightmarish and twisted vision courtesy of artist, H. R. Giger), and buoyed by an excellent ensemble cast spearheaded by the one and only Sigourney Weaver in a career-defining turn as badass heroine Ripley, Alien is a high-concept and dark futuristic thriller that answers the age-old question: what if life out in space is not only hostile but actually relies on us as part of its reproductive cycle?

Even though Alien went on to spawn an entire media franchise, the original film is arguably the scariest of them all as a result of its claustrophobic space setting, the primitive nature of the weapons aboard the Nostromo, and the sheer viciousness of a sole Xenomorph threat. Absolutely essential viewing!