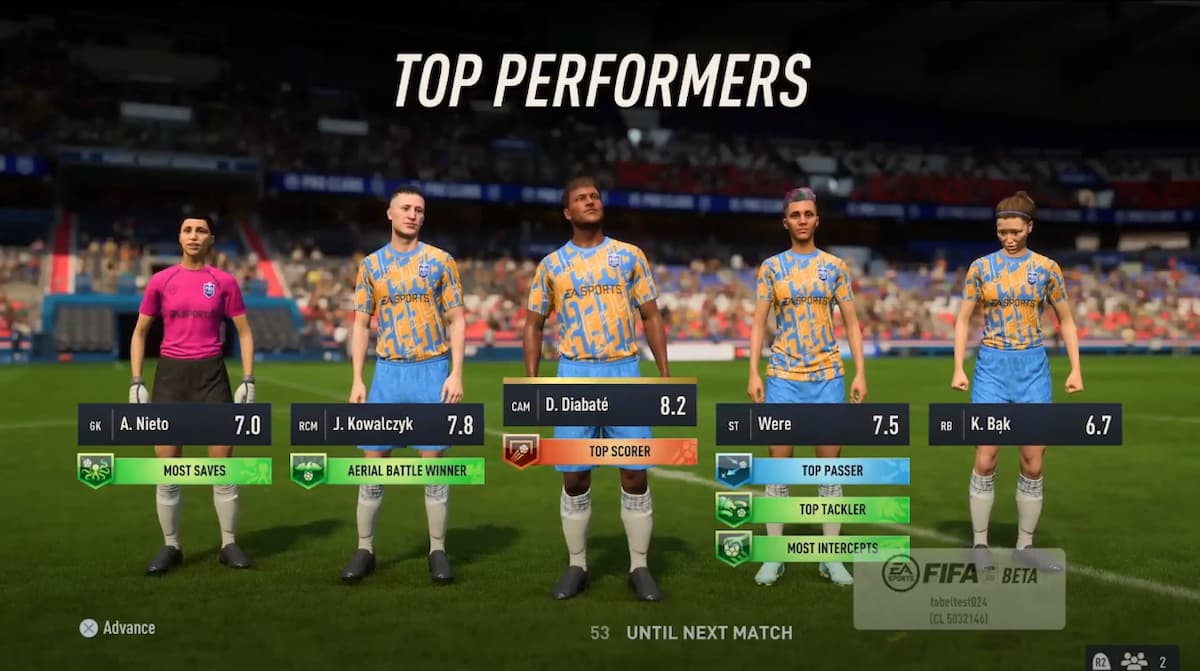 EA Sports has shared the latest pitch notes for its upcoming FIFA 23, this time focusing on the popular online Pro Clubs mode, which sees players control one player in a team and take on an opposing side.

The news comes via a post on the official FIFA 23 website, which outlines a whole swathe of changes coming in the latest iteration of EA’s popular soccer series, with an overhaul of the Virtual Pro leveling system at the forefront.

In the upcoming entry, players will be able to level up their Virtual Pro by completing Skill Games while waiting for their teammates to come online. These will also include a ‘Club Leaderboard’ so you can see how you fare against your clubmates on each individual game. Each of the 66 Skill Games will also allow you to earn XP up to a weekly cap, with more XP being dished out for the harder Skill Games and higher ranks of each one.

Players will also now be able to earn XP for their Pro Clubs Player by completing VOLTA matches, including Arcade games like Dodgeball and Foot Tennis.

EA Sports has also taken on board the feedback that players shared from their time in the game mode in FIFA 22, namely that leveling up your Pro was too slow and as such, Perks were unlocked too slowly and so experimentation with different builds wasn’t possible.

To address this feedback, in FIFA 23, the amount of XP requires to level up has been decreased, while an additional 25 levels have been added to bump the max level up to 100. Players can also earn a maximum of 185 skill points, and all Perks will be unlocked throughout the first 25 levels of progression. Beyond level 25, players can unlock more perk slots and earn more skill points, with the aim that this will allow for more experimentation and variation in player builds.

As part of the ‘merging’ of the VOLTA and Pro Clubs modes, there will also now be shared season progression, where all time spent in VOLTA or Pro Clubs game modes will see players earn Seasonal Points that contribute towards unlocking new gear for your Virtual Pro. Seasonal Points will help you progress through the Seasonal Event Progression system shared between both modes, with Seasonal Events continuing to rotate on a six-week basis, and offering new content for players to earn and unlock for their Pro Clubs and VOLTA players.

FIFA 23’s Pro Clubs will also introduce four new Perks to the roster, including one attacking perk, one chance creation perk and two defensive perks. These are as follows:

For those that like to play Drop-In games, a few tweaks have been made for the upcoming entry in the series that will see Half Length reduced to four minutes from six minutes, and a Golden Goal extra time period that will take place in the event of a draw after 90 minutes.

Finally, there will be a post-match accolades screen which will highlight the top five performers on your team, assigning them for topping statistical categories such as most tackles, furthest distance run, top passer, and prowess in aerial battles.

On the VOLTA side, players will now find six new Arcade Games at launch, from Dribble King which requires you to stay inside a moving circle collecting trophies and avoiding obstacles, to Obstacle Course which sees you racing to the end of a pitch filled with obstacles before scoring a goal before any of your opponents.