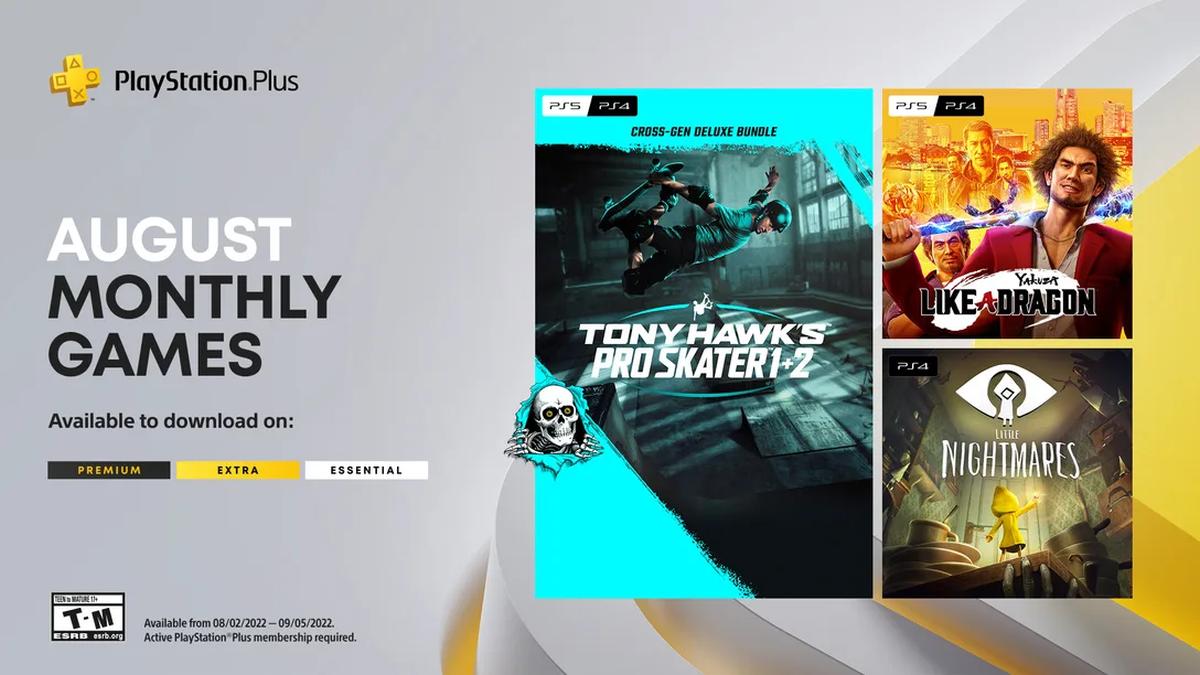 Today Sony Interactive Entertainment announced the monthly games that will be granted to PlayStation Plus subscribers in August 2022 at no additional cost.

We’re getting Yakuza: Like A Dragon and Tony Hawk’s Pro Skater 1+2 Cross-Gen Deluxe Bundle for PS5 and PS4, and Little Nightmares for PS4.

The new games will be made available in August o PlayStation Plus Essential subscribers.

If you’re unfamiliar with any, you can read an official description below.

Yakuza: Like A Dragon | PS4, PS5
Level up from underdog to dragon in this action RPG. Ichiban Kasuga, a low-ranking grunt of a low-ranking yakuza family in Tokyo, returns to society after serving 18 years for a crime he didn’t commit. Uncover the truth behind his family’s betrayal while exploring – and fighting – your way across a modern-day Japanese city. Build a party from a ragtag group of society’s outcasts, spending time with them to unlock new abilities and combo skills. Take time off from your quest to immerse yourself in go-karting, arcade games or 50 substories.

Tony Hawk’s Pro Skater 1+2 Cross-Gen Deluxe Bundle | PS4, PS5
Drop back in with the most iconic skateboarding games ever made. Play Tony Hawk’s Pro Skater & Tony Hawk’s Pro Skater 2 in one epic collection, rebuilt from the ground up in incredible HD. All the pro skaters, levels, and tricks are back and fully remastered, plus more. Skate to songs from the era-defining soundtrack along with new music, hit insane trick combos, or shred all the original game modes by going head-to-head with local 2-player modes! Strengthen your skills by taking your sessions online and competing against players from around the world in multiplayer modes and live leaderboards. Play as skaters from the original roster (Tony Hawk, Kareem Campbell, Bucky Lasek, and more) or slide into the new roster made up of Olympian skaters (Nyjah Huston, Aori Nishimura, Leticia Bufoni, and more.)

Little Nightmares | PS4
Immerse yourself in Little Nightmares, a dark whimsical tale that will confront you with your childhood fears! Help Six escape The Maw – a vast, mysterious vessel inhabited by corrupted souls looking for their next meal. As you progress on your journey, explore the most disturbing dollhouse offering a prison to escape from and a playground full of secrets to discover. Reconnect with your inner child to unleash your imagination and find the way out!

You still have a few days to add July’s PlayStation Plus lineup to your collection before PlayStation makes those games unavailable.

That being said, Yakuza: Like a Dragon isn’t the only Yakuza Game that will hit PlayStation Plus in August, even if you’ll need to be an Extra or Premium subscriber to get more.

Here’s what will be added to the respective tiers in August:

And there’s even more coming later this year.