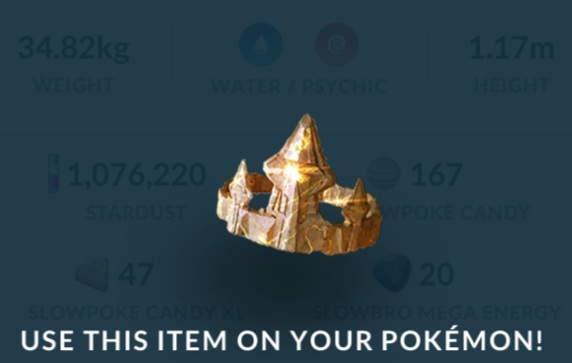 The King’s Rock is one of the original evolution items introduced in the Pokemon franchise that could make a Pokemon holding it evolve when traded. In Pokemon GO it works a little differently. The King’s Rock plus 50 Candies is the only way to evolve Slowpoke in Slowking and Poliwhirl into Politoed. Here’s everything you need to know about how to get the King’s Rock in Pokemon GO.

How to Get King’s Rock in Pokemon GO

There are a few different methods for obtaining this evolution item in Pokemon GO. Throughout the year there are frequently special timed events, special boxes in the Shop, and other research tasks that can reward you with the King’s Rock. But if you don’t want to sit around waiting for a special event, then there are still a few more methods that you can use.

How to Get King’s Rock By Spinning PokeStops & Gyms

This is one of the easiest methods to start trying. King’s Rocks are still fairly rare in Pokemon GO, so you’ll need to spin many PokeStops and Gyms. Still, it’s a free method that will give you instant results. However, the items that drop are random and there’s no assurance that you’ll even get any kind of evolution item. Fortunately, there’s another method that has to do with spinning PokeStops and Gyms which is a bit more reliable.

Each time you do your first spin or catch your first Pokemon, you’ll see a counter appear on the screen indicating that you have a streak of a certain number of days up to seven. This is where the King’s Rock comes in.

After an update that was released back in 2017, the seventh consecutive PokeStop or Gym spin in the weekly streak assured an evolution item would be dropped. A trainer must also be level 10 to obtain evolution items from Gyms or Pokestops by any method (weekly streak or random).

Sometimes you’ll get a Metal Coat, Sun Stone, Dragon Scale, or Upgrade. But this method you can do by yourself is the only one currently in Pokemon GO that will always give you some evolution item (outside of special research tasks).

How to Get King’s Rock by Opening Gifts

There’s not much to this method. When you open a Gift sent to you by a friend, there will be a slight chance of obtaining an evolution item. The only catch is that this method relies on your friends to send you gifts. If some of your Pokemon GO friends aren’t very active or don’t care much about gifts, then it might be tough to get a King’s Rock this way. It’s important to note that you can only get King’s Rock this way once the trainer reaches level 10.

This old Special Research is one of the originals and it ended with players being able to obtain Celebi for the first time in Pokemon GO. If you’ve already finished A Ripple in Time, then you’ll have to go with one of the two methods above. But if you haven’t yet finished part three, then you’re in luck.

If you’re on part three of this Research, then all you need to do is reach trainer level 25, use a Sun Stone to evolve Gloom or Sunkern, and hatch nine eggs. Then a Premium Battle Pass, an Eevee encounter, and a King’s Rock will be all yours.

That’s all there is to know about how to get the King’s Rock in Pokemon GO. The best advice is to just be patient and wait for the evolution item that comes with the seven-day PokeStop or Gym spinning streak. You might (but probably won’t) get a King’s Rock on the way to the seventh day. Plus it doesn’t cost you anything to just play the game as you normally would and spin a Gym or PokeStop every day.