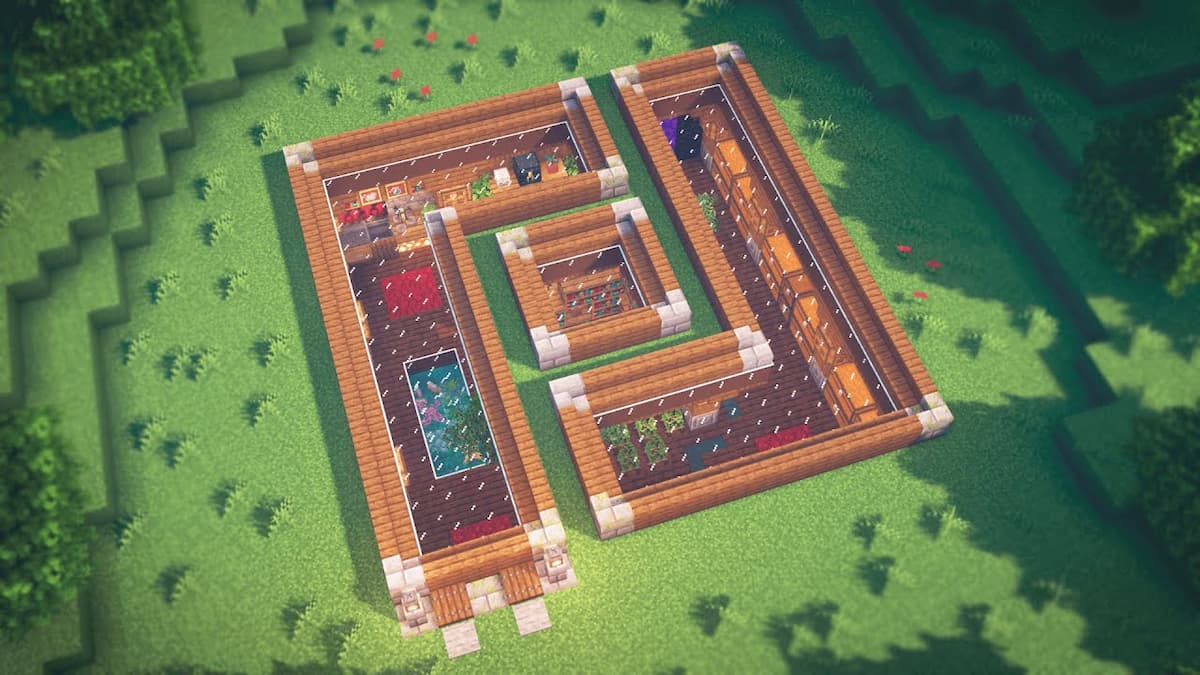 Since Minecraft is all about survival, fans create strong armor, enchanted weapons, and secure bases to better their defense mechanisms. These safety precautions are useful when it’s nighttime, that’s when the creepy crawlies come out, including Zombies and Creepers. For players that want a little more protection from their enemies, here are seven underground base ideas and designs for Minecraft.

A classic survival bunker is a way to go when defending yourself against the monsters and creatures of Minecraft. You will have all you need in the safety of your underground base including a craft room, storage area, and a bedroom. Players are advised to include enough torches or any other light sources to illuminate various rooms because monsters do spawn inside places that are not properly lit.

You can find a tutorial on how to build this bunker here on YouTube, which features a step-by-step guide for each area of this design.

If you want to go above and beyond, the underground village will test your design skills. The easiest places to build this idea are in ravines or caves deep beneath the ground. YouTuber JINTUBE made their build completely from scratch by creating a mountain entirely on their own. You can follow along with their process here on YouTube.

Placing villagers in this base is also a great idea to liven the place up. You can have them follow you underground or use a Villager egg for those who are in Creative Mode. Players can further customize the environment by breeding the Villagers and changing their professions if need be.

We’ve all seen how cool secret bases can be and now you can make one yourself with this Minecraft underground design. There are many variations on how to do this type of idea, like the simple one shown above on YouTube by having a block over a hidden ladder. Some players have even made elaborate builds involving Redstone where they can only get in the base if they drop a Redstone Torch at the right place, like what this YouTuber has done.

Another way to accomplish this design is by using a chest and a Sticky Piston to make an elevator system. This idea requires a lot of work and patience, so you can use this tutorial on YouTube to help you.

This featured idea has been used by many players of Minecraft and continues to improve as time progresses. A glass ceiling over your underground base is one of the most elegant solutions to creating a base that both looks good and offers decent protection.

The glass ceiling underground base is a great way to see what is going on around you since you can easily look up. The views are also incredibly divine when you see the night sky full of stars or the rain as it drops on your base. When it comes to underground ideas, the addition of glass ceilings is extremely popular in the Minecraft community, and you can try it out yourself by following along with a guide on YouTube.

Underwater designs are difficult to build, but they do make for an amazing creation once you can pull it off. This sloped underwater idea is a unique way of mixing aquatic and underground themes. By designing a Minecraft base in a stair-like fashion, you can have different levels to separate your bedroom and other amenities you may have. If you would like an in-depth tutorial on this build, you can find it here on YouTube.

A basement may be a simple idea, yet it is still an underrated creation in the Minecraft world. This design is useful for those who want to hide their valuables or expand their house even further. Adding a basement to your build can trick others into thinking the second floor or attic is the only area to explore in your house.

This idea can also lead to something bigger by including tunnels underneath the house to help transport your character to selected areas, which helps with safety issues above ground. Players can design this base in many ways, but if you want the particular guide of the house above, you can follow this tutorial on YouTube.

The Ultimate Underground Base

To save the best for last, we are ending this list off with the ultimate underground base. This design goes even further than the village idea mentioned before, by creating a high ceiling castle deep beneath the ground. One could even say that you never really have to leave this base after gathering all you need to survive.

The ultimate underground base is meant to be an entirely different world strictly under the surface. Players can even go on to create a labyrinth inside this fortress if they choose to do so.

Now that you know these seven underground base ideas and designs for Minecraft, create any of these versions in your way to test your architecture abilities. If you want more ideas or any other information about Minecraft, check out the relevant links below and stay tuned for more on Twinfinite.

The Tomorrow Children: Phoenix Edition for PS5 & PS4 Coming in 2022