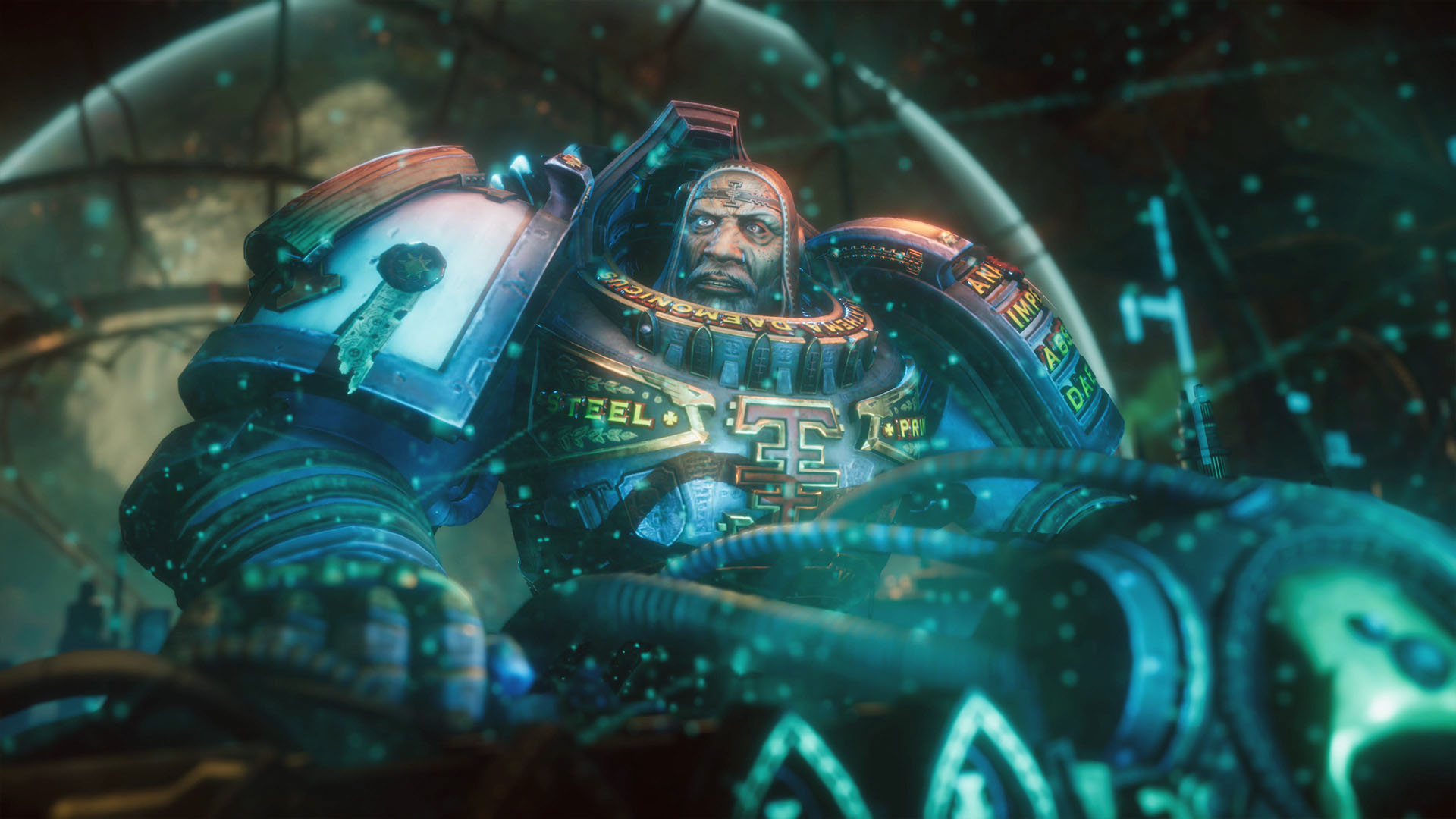 It’ll launch exclusively on PC (via Steam and Epic Games Store) on May 5 and pre-orders open today.

If you pre-order, you’ll receive the in-game items Liber Daemonica and Destroyer of Crys’yllix Daemonhammer.

A Castellan Champion Edition will also be available, offering an exclusive character.

We also learn that steward of the armoury Grand Master Vardan Kai will be voiced by well-known actor Andy Serkis.

Below you can read an official description of the game and take a look at a new trailer and screenshots, on top of reading a Q&A with Serkis himself about his role.

And yes, if you’re wondering, that’s Mortarion right there.

If you’d like to read more, you can check out my very own preview.

“Players will command the Grey Knights in fast-paced and brutal ground combat missions, using high-precision tactics and environmental destruction to eradicate the forces of Chaos. They must use everything at their disposal to purge the Bloom, switching up their strategies as circumstances dictate. During missions on infected planets, events known as Warp Surges can occur and summon enemy reinforcements, or make opponents even stronger.

The longer players leave a planet to wither under the influence of the Bloom, the more dangerous combat missions there become as different ‘strains’ of the plague take hold. Enemies and the environment will mutate over the course of the campaign as a result of the Bloom’s spread, keeping commanders on high alert with unexpected challenges. Players will forge their champions to face down Nurgle’s corruption, assembling their squad from an array of different classes, each with their own skill trees and specialisations in battle. With customisable equipment, upgrades and armour, players can build their personalised dream team of Battle-Brothers.

The Grey Knights will contend with a wide variety of Nurgle’s minions, from vile Plaguebearers to the towering Greater Daemons and Daemon Princes. They’ll eventually face the ultimate challenge in the Prince of Decay and Primarch of the Death Guard himself: Mortarion. Along the way, players will experience a rich Warhammer 40,000 storyline brought to life by New York Times bestselling Black Library author Aaron Dembski-Bowden.”

Who is Vardan Kai, and what’s his role in the game?

“Vardan Kai is a Grand Master of the Grey Knights and the Steward of the Armoury. In Warhammer 40,000: Chaos Gate – Daemonhunters he acts as the player’s point of contact at the Citadel of Titan, where he’s in control of deploying and managing the chapter’s resources across the materium. As the campaign progresses, players will regularly communicate with Kai to request Master-crafted arms and equipment to support them in their quest to purge the Bloom. He’s a key figure within the Grey Knights hierarchy and he doesn’t suffer fools, so players should be wary of disappointing him as he has the power to restrict their access to these vital resources.”

You’ve played many roles across your career, from CGI characters and live action roles to voice over roles such as Vardan Kai in Warhammer 40,000: Chaos Gate – Daemonhunters. Do you approach each type of work differently?

“Personally my approach has been shaped by working with different directors, storytellers and filmmakers over the course of my career. I think that regardless of the medium, as an actor you’re inhabiting that role. You’re stepping into the mind-set and into the shoes of a character, assembling a psychological profile and a physicality for that character, regardless of whether I’m creating a voice or appearing physically on-screen. It’s been a joy to become the voice of Vardan Kai and to step into the Warhammer 40,000 universe.”

How did you find the process of creating the role of Vardan Kai, what can players expect from him?

“Vardan Kai is a key figure of authority throughout the campaign from the player’s perspective, but there’s this ‘master and pupil’ type of relationship which you see developing. When I was creating his voice, I imagined him as this character who almost has a face cut out of granite, where you might, if you’re very lucky, get a half-smile out of him. That being said, he can be brutal at times. I’m looking forward to seeing how players respond to some of his ‘tough love’.”

What was it about the role which excited you?

“The Warhammer 40,000 universe is an absolutely incredible setting, the depth of the universe and the rich lore has produced something which really grips you as an audience member. It’s those kinds of deep immersive experiences which have fascinated me throughout my career. Stepping into the shoes of Vardan Kai, becoming a part of the grim darkness of the far future, it’s been a wonderful experience.”

What’s next for you?

“In March I’ll be back on cinema screens, appearing in The Batman as Alfred Pennyworth, which is truly a joy. It’s fantastic to have the opportunity to portray such a beloved character from an iconic franchise. Alongside this, I’m also working on a feature-length instalment of the brilliant BBC crime series Luther, alongside Idris Elba and Cynthia Erivo.”