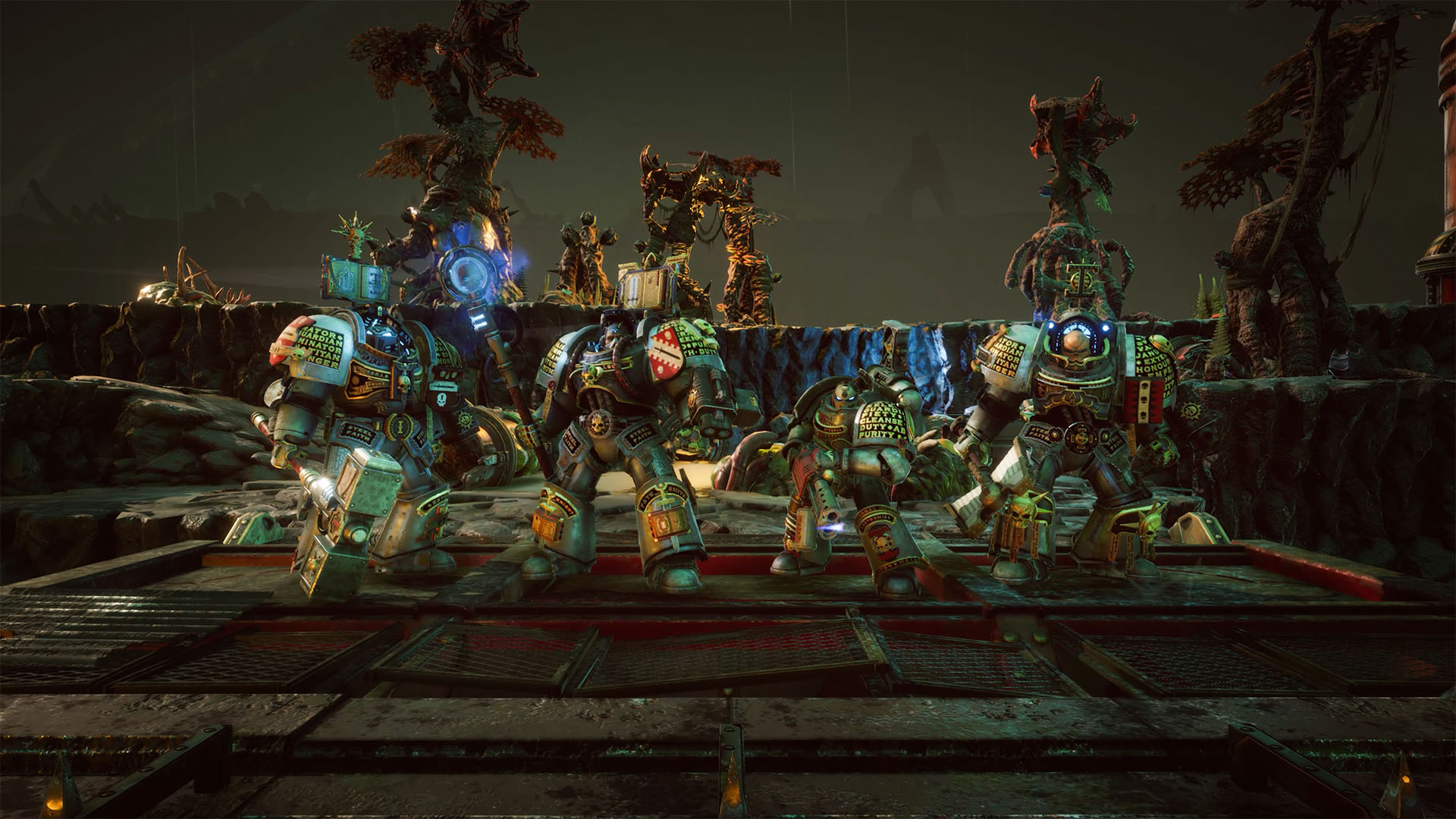 A few days ago, I was shown a behind-closed-doors presentation of the upcoming Warhammer 40,000: Chaos Gate – Daemonhunters by Complex Games.

It provided a bird’s-eye view of the gameplay, but do keep in mind that I did not get to play the game directly, so you can consider this article as an early first impression.

If the game’s title sounds familiar to the veterans among you, you shouldn’t be surprised. Warhammer 40,000: Chaos Gate is a turn-based tactical game published by SSI in 1998. It placed the player in control of the famous Ultramarines chapter of space marines locked in a struggle against the Khorne-following World Bearers.

This new game brings back the brand and the turn-based tactics setup, but not the protagonists. This time around, you’re controlling the elite demon-hunting space marines Grey Knights against the forces of Nurgle, including the Plague Marines of the Death Guard, within a sector infested by a deadly epidemic named Bloom.

It’s a big shift in terms of lore. The Ultramarines are basically the archetypal space marines, so much that their primarch Roboute Guilliman is the one who wrote the Codex Astartes, upon which a large number of other chapters found their organization and traditions.

The Grey Knights definitely divert from the Codex Astartes in many ways, and their very nature as specialized demon hunters gives them a very specific flavor that differs radically from most Space Marines.

Chapter lore aside, it’s definitely great to see that Complex Games has stuck with turn-based tactics, even if the interface and specific mechanics have definitely been modernized.

Warhammer 40,000: Chaos Gate – Daemonhunters appears to play very much like an XCOM game, with clear similarities in the interface and flow with the latest Firaxis games. This is not to say that it’s exactly the same, but if you’re an XCOM fan, you should feel right at home.

You start your war on board the strike cruiser Baleful Edict, which has been severely damaged in battle. This is your mobile base-building element as you’ll have to repair the ship and then upgrade it.

Inside, you can set up, upgrade, and customize (and it appears that the customization suite is satisfyingly deep, which is great for a video game based on a tabletop wargame that has you assemble and paint miniatures) your space marine squads before sending them into action.

The class system appears to be robust, with four basic classes that can evolve into four advanced ones including familiar chaplains and librarians, giving you plenty of flexibility to assemble your squads to fit your tactical style.

One of the main differences with the XCOM franchise is that, here, you don’t start with untrained goons that will miss point-blank panic shots. The Grey Knights are the best of the best of what humanity can offer. They’ve been genetically modified to be even better, and they have survived through centuries, if not millennia, of warfare against mankind’s most vicious enemies. The game seems to do a good job of conveying the feeling that you’re fighting with such extremely skilled characters from the beginning, foregoing easy progression tropes.

That being said, the XCOM feeling is definitely there when you move your Grey Knights on the battlefield, giving you the ability to identify movement routes, cover, and overwatch in a very familiar way. After all, there is no need to reinvent a wheel that already holds the road quite perfectly.

That being said, combat appears to be quite deep, including the ability to stun enemies and attack specific body parts in melee. This has interesting gameplay implications: in the presentation, we saw a Chaos Dreadnought grabbing a marine within its tentacle and preparing to crush him, while another marine swooped in and cut the tentacles to release his endangered battle-brother.

An interesting aspect is that the game throws curveballs your way with “Warp Surges,” which bring in reinforcements from the enemy, new mutations, or other hazards. They appear to be unpredictable and should help make things more exciting and less formulaic than the usual “just methodically clean the battlefield over and over every time, and then get to the extraction point.” As a matter of fact, the game appears to reward aggressively pushing when possible.

Ultimately, Warhammer 40,000: Chaos Gate – Daemonhunters appears to have the potential to be worthy of the legacy of its predecessor while modernizing its gameplay and following the basics of some of the excellent examples in the genre today.

Once upon a time, Games Workshop was incredibly stingy in providing game developers with chances of working with the Warhammer 40,000 universe. Nowadays it feels that they drop the IP onto everyone who asks without much quality control. This resulted in some rather disappointing recent games. From what I’ve seen so far, Warhammer 40,000: Chaos Gate – Daemonhunters could be one of the few good ones.

Warhammer 40,000: Chaos Gate – Daemonhunters launches on May 5, 2022, exclusively for PC. To see more, you can also check out the latest news.