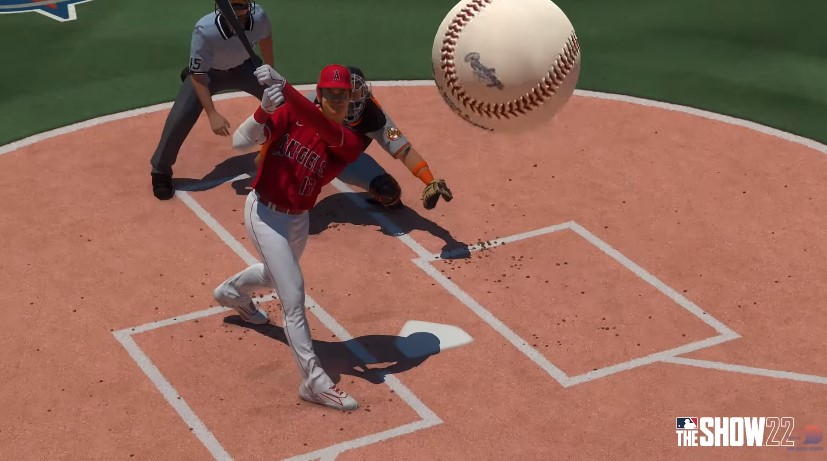 Last week, MLB The Show 22 was officially revealed along with a couple of cover reveal trailers showing off Shohei Ohtani on the standard edition and a manga-inspired version of the slugger on the MVP Edition. But news for the upcoming baseball title hasn’t stopped there. Earlier today, the official gameplay reveal trailer for MLB The Show 22 went live on YouTube via the Sony San Diego channel.

The trailer begins with a panning shot just beyond the center-field wall in Angel Stadium. It then cuts to a few gameplay shots of Ohtani pitching on the mound and launching bombs into the stands. Then it cuts to multiple different teams doing similar pitching, diving, swinging, and celebration animations.

There wasn’t anything that stood out as new in the gameplay. The trailer was very much just a brief view of how the game will look on the current generation of consoles. Nothing about gameplay mechanics was mentioned in this trailer.

Near the end of the video, you briefly get a glimpse of slugger, Ryan Howard, rounding the bases. And later on, there was a surprising reveal of baseball Hall of Famer, Randy Johnson, dealing from the mound in a classic Arizona Diamondbacks jersey. Johnson was one of the most dominant and imposing pitchers in MLB history standing at a ridiculous 6’10”. It’ll be interesting to see how these all-time greats stand up against the superstars of today.

MLB The Show 22 is coming to all previous-gen PlayStation and Xbox consoles along with the current-gen ones and the Nintendo Switch. However, this gameplay trailer only features gameplay from the PS5 and Xbox Series X|S versions. Last year, the stadium creator made its debut in MLB The Show 21 exclusively in the current-gen versions. It’s unclear if any of the content in 22 will be exclusive to the two newest PlayStation and Xbox consoles.

You can check out the full MLB The Show 22 gameplay trailer down below. Right now, the game can be preordered for PS4, PS5, Xbox One, Xbox Series X|S, and Nintendo Switch. MLB The Show 22 hits the shelves and digital storefronts on Apr. 5.