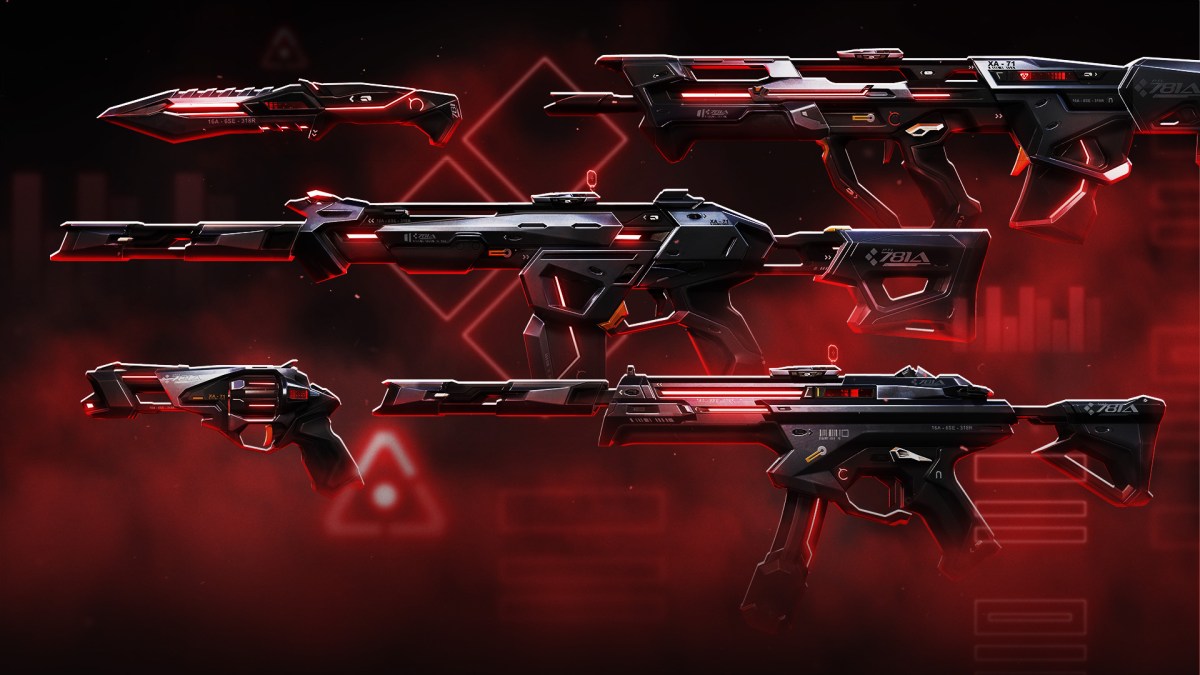 For Valorant’s fourth episode, Riot Games is releasing one of its most ambitious weapon skin lines to date. It’s called ‘Protocol 781-A,’ and it’s themed around a dark-futuristic aesthetic that features some highly impressive attention to detail. More than just an extremely cool design, each weapon adds 60 unique cyberpunk-esque voicelines for weapon inspects and various other triggers.

Each weapon has three different color styles. Here’s a look at all three using the Bulldog as an example:

As is typical, Riot Games included some developer commentary highlighting the creatives processes behind the new weapon skin bundle’s design.

“With Protocol 781-A, our goal was to create a sci-fi skin like that would be very appealing but unlike any other sci-fi skins we’d created so far. So, not clean and futuristic like Ion, not otherworldly like Singularity, and not fun and colorful like Glitchpop. Instead, we wanted something dystopian that wouldn’t feel grungy or dirty. We ended up with a backstory that the skins exist in another world where large cities have seen explosive growth, resulting in overcrowding and chaos, so an oppressive shadow government attempts to control the disorder.

As a result, a law known as Protocol 781-A dictates that all government personnel are issued a weapon that provides combat assistance, monitors performance, and ensures compliance. Another way of saying this is that Protocol 781-A is an artificial intelligence program specially designed to ensure each soldier strictly adheres to mission parameters and executes their assigned function at maximum capacity. Once we landed on this backstory, we knew that the skin should feel dark, gritty, and manufactured. Manufactured means functionality above all else—no modifications, no personality, and no frills. The irony here is we still did a set of three variants for the skin line because it wouldn’t be cool to skip making variants just for thematic reasons.“

“We went back and forth on adding voice-over (VO) to this skin line because we weren’t sure if it was possible. Once we decided to delay the skin, it was much more feasible. After we developed the backstory for Protocol 781-A with our narrative writer, we determined that the VO should feel controlling, robotic (but emotionless, not a friendly robot), strict, demanding, cold, and as if there’s always an implicit threat in what it says to you. We thought it was ironic that the skin would praise a player for getting a kill by telling them that their performance was satisfactory.

There are over 60 unique VO lines, ranging from inspect, kill, barrier dropping, and more. We went back and forth for languages for the skin line since we weren’t sure if we should use one universal language or localize it. We decided to go with a localized option, with around 13 unique languages, so that players could enjoy the skin in their region’s language. Likewise, we debated if we should have a male or female voice and opted to do both, with the female voice applied to two variants. Our headcanon for the two voice options was that, in the Protocol 781-A world, people are assigned a voice variant based on which voice profile the person’s psychological evaluation determines will evoke the most compliant response.“

Here’s the new trailer to go along with it: