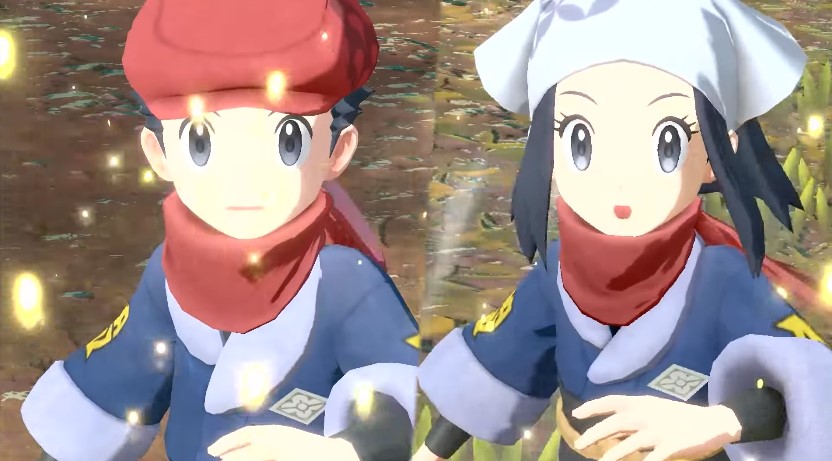 Earlier today on The Official Pokemon YouTube Channel, a new trailer for Pokemon Legends Arceus was released. This short two-minute-long video showed off some new gameplay of features that had already been revealed. But what’s more intriguing is the brief tease of the final starter evolution forms in Pokemon Legends Arceus.

Typhlosion, Decidueye, Samurott are the three forms we already know about from past generations. And thanks to recent leaks, we already know what the full models of the Hisuian final evolutions look like. But if you’re the type of Pokemon fan who likes to be surprised, then don’t worry. We’re not going to spoil the reveal for you.

The new trailer featuring the Hisuian starter Pokemon begins with multiple shots of Jubilife Village. It seems like a peaceful place with a few villagers roaming around the buildings there. We even get a glimpse at the scene where you’ll get to choose your starter Pokemon. But just like the final evolution reveal, the clip is fleeting.

Next, we see multiple shots from around Hisui starting with a snowy shrine with statues of Wyrdeer and Kleavor as well as a mysterious symbol that looks extremely similar to the rings that wrap around the body of Arceus. There are open fields where Pikachu, Growlithe, and other Pokemon roam free. There are even close-up looks of the main character gliding through the skies with Hisuian Braviary and cutting through the water on the back of a Basculegion.

We also get a few more looks at a handful of the main character running and rolling away from the attacks of different Alpha Pokemon.

And then the big moment of the trailer arrives where Dartrix, Quilava, and Dewott appear and the evolution animation begins. As was mentioned earlier, we don’t get a great look at the final evolutions, but you can kind of make out some of the lines if you pause the video and take a closer look.

The trailer wraps up with the animated scene that was featured in past trailers with the Hisuian starters.

You can check out the full Hisuian final starter evolution trailer for Pokemon Legends: Arceus down below. And you can pick up the game on Nintendo Switch when it releases later this week on Jan. 28.