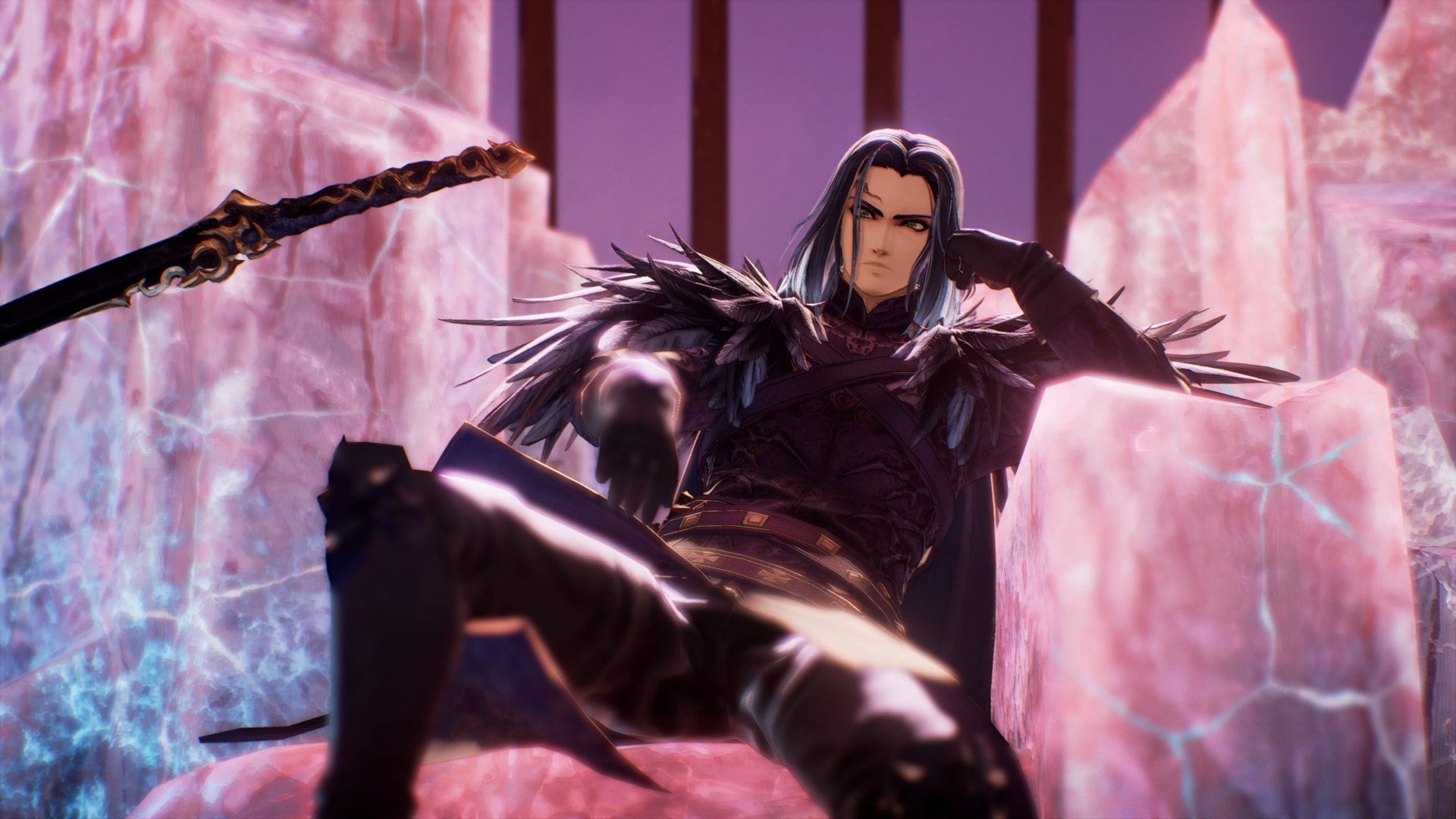 Vholran has been randomly showing up and bothering your party all game long, and now it’s time to fight him for real. We’ve got some useful tips on how to take down this tough Lord. Here’s how to beat the Lord Vholran boss fight at Del Fharis Castle in Tales of Arise.

Vholran is the Lord of the Water Master Core, so there are a lot of Water and Ice element attacks in this fight to deal with as he zips around the battlefield. Equip Garnets to reduce Water element damage by 50% if you have any. Freeze Charms will also prevent close-range attackers like Alphen, Kisara, and Law from getting frozen.

As an added precaution, be sure to cook any food dish that raises the Elemental Defense stat for all party members before the fight.

Try not to use too many Orange Gels and Life Bottles in this phase of the fight because it’s a long boss battle overall. You’ll need as many CP and HP restoration items as possible for the second phase.

Vholran is able to evade attacks easily so use Dohalim’s Boost Attack to keep him stuck in place when he starts to dodge frequently. You’ll know the Boost worked when Vholran’s feet turn green. And, of course, Rinwell is the MVP when it comes to interrupting arte casting, so use her Boost Attack to prevent Vholran from casting anything.

As soon as the party mentions not being able to hit Vholran, use Dohalim’s Boost like in the clip below, and a D-Pad prompt should show up shortly afterward.

Outside of artes, he has tons of spinning slashes in his combos, and if he lands any hits, he’ll leap into the air and crash down with an ice move. It’s usually best to keep a safe distance unless he’s just done a combo to completion because, otherwise, you’ll be caught up in the combo since bosses can’t be staggered normally.

Interrupting his dodges and artes with Dohalim and Rinwell will cause him to take a knee and that’s when you want to attack with everything you’ve got. Alphen’s Boost also has the same effect as long as Vholran isn’t in Over Limit, and Kisara can even stop his spinning slashes to defend you if you time her Boost right.

When Vholran’s health goes below 50%, he’ll enter Over Limit and summon an insane amount of water tornadoes while charging up another arte that can’t be interrupted with Rinwell. Don’t waste her Boost here. Just be prepared to dodge for your life.

The arte he’s casting will summon another tornado at his location so keep your eyes on him while getting some distance. Just stay as far away from him as possible for this section. It’ll look exactly like this clip here:

After that dangerous section is over, he’ll resume his regular spinning slashes mentioned above, but with more Over Limits mixed in to make it impossible to stagger or stop him. Also, be on the lookout for when he slams the ground and makes ice appear — don’t counterattack right when the ice appears because it’ll also explode and interrupt you.

Wait it out or dodge the explosion before hitting him back. You’ll have to dodge these moves and wait them out until he’s no longer glowing. Then, use Dohalim’s Boost to trap him in place once he stops moving. He’ll take a knee again and you can lay into him.

Remember, when he isn’t in Over Limit, Alphen’s Boost can also down him temporarily. So, use it at the right moments when Vholran isn’t glowing to gain an advantage. Continue dodging and attacking in this pattern until the fight ends with a Strike D-Pad prompt.

After it’s revealed that Vholran is also a Sovereign, the next phase of the boss fight will begin. This time, he’ll start to use every single element in the game except Light. Here’s what a few of his new moves will look like:

His Dark attack creates a wave that spreads outward from his location. Dodge into when it or block just when it reaches you to avoid damage. His Lightning move is essentially the same as the one from the Kalmarzel and Kaldinzel boss that merged together. Lightning strikes in a circle around him then spreads outward a short distance.

He also has the same icy ground wave that goes out in a straight line. Though, his new ice move summons icicles in a circle around one of your party members, shoots them inward, then shoots them back out in the opposite direction. His Wind move summons a tornado at his location, of course. And, finally, the Fire one causes a pillar of flame to shoot up from the ground.

Down him as soon as you can to avoid dealing with any/all of these attacks. Use Alphen and Dohalim’s Boosts to do so. Rinwell should be on standby, as always, to interrupt arte casting. Law is a great choice to sub in if you want someone to focus on offense while you focus on avoiding attacks. Dohalim and/or Shionne (preferably Shionne) need to be in there to heal and cast Resurrection if anyone goes down.

The key here is to make him take a knee as often as possible like in the clip above because going on the defensive all the time will get your party wiped as Vholran uses one move after the other in quick succession.

At 50% health, he’ll go into Over Limit and cast a surprisingly easy to dodge Mystic Arte. A giant ice sword will fall from the sky slowly and cause icicles to pop up from the ground as it lands.

The rest of your party might not survive this attack, so if you’re low on Life Bottles, take control of Shionne or Dohalim to keep the healers alive instead of trusting the AI to dodge.

Hit the dodge/block button in different directions to avoid damage entirely. Press the button at a steady pace like in the clip below to stay safe.

What comes next can be crazy if you don’t know what to expect. In this part of the boss fight, Lord Vholran will freeze the floor and shoot out a giant wave of ice in the direction he’s facing. Dodge/block as soon as it gets released, or simply keep running to the side of him in one direction around him to avoid it.

If you can’t get out of the way, get ready to heal everyone who gets hit because that’s probably his strongest attack in terms of damage.

If you can survive that, you can win this fight. He’ll exit Over Limit and go back to all the moves he did at the start of this second phase, along with those spinning slashes from the first phase. If you ever get caught in that spinning combo, remember to use Kisara’s Boost to stop Vholran dead in his tracks as long as he isn’t in Over Limit.

Also, if Rinwell’s Boost isn’t ready to be used to interrupt artes, try to use a different Boost to stop him through sheer damage. Alphen, Law, and Dohalim are the best options for that.

Once his health gets down to nearly zero, he’ll use the giant ice sword Mystic Arte again, so be sure to repeatedly dodge. Even if all your party members get hit, you can revive them all at once with the Omega Elixir that the game gives you right before this boss fight.

If you make it past that arte, a special button prompt will show up on the screen. For me, it was L2 + Right D-Pad but it could be different for you depending on your party. After that cinematic attack, Vholran will take a knee again, giving you enough time to finish him off.

This is one of the hardest boss fights up to this point, but that’s everything you need to know about how to beat Lord Vholran at Del Fharis Castle in Tales of Arise. Be sure to check out our guide wiki for more tips, tricks, and boss guides if you want more pointers.