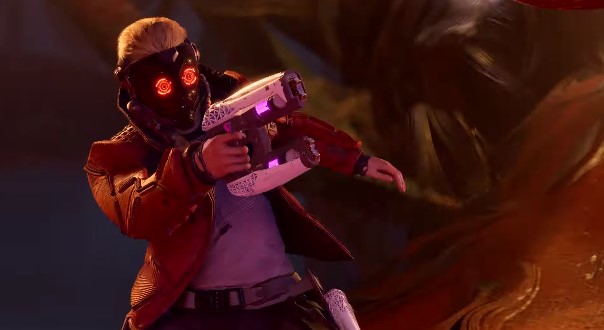 At the start of the trailer, the Guardians of the Galaxy are seen interacting with the character Grand Unifier Ranker, who promises that someone named The Matriarch will bring an end to all suffering and grief brought on by the Galactic War that preceded the events of the game.

The Guardians seem to believe that they were under the influence of some external force. The telepathic Russian space dog, Cosmo gives them a briefing on the group known as the Universal Church of Truth.

The group goes to talk to Xandarian Worldmind about getting some help to take on the Universal Church of Truth. But it doesn’t turn out as intended for the Guardians. Xandarian Worldmind ends up informing the group that their probability of being successful in the mission is only 0.3%.

In the trailer, Star-Lord’s blasters can be seen transforming. Thanks to the PlayStation Blog, we now know that this is an ability he will be able to unlock throughout the story. Star-Lord will be able to transform his guns in many different ways to cause its shots to have multiple elemental effects that will be used for combat and exploration.

Later on in the trailer one of the enemy characters says something about the Guardians rejecting “the promise” and that they must be destroyed. It’s not entirely clear what this “promise” is or even what The Matriarch will look like, but it seems like this team of heroes will have their hands full yet again.

And if you just can’t get enough PS5 game trailers, then you’ll want to check out the full PlayStation Showcase 2021 livestream down below.