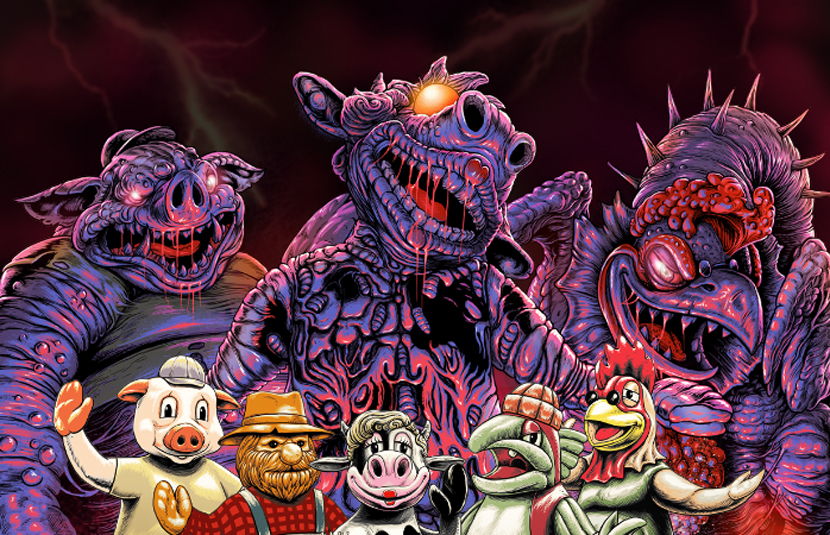 Go ahead and check out the nightmarish video down below. We warn you, though, you probably won’t be sleeping tonight…

Yep, we know – there’s enough nightmare fuel in there to keep you going till All Hallows’ Eve. But we warned you, right?

As you can see, the footage blends McDonalds-esque jollity with some uber dark Five Nights At Freddy’s vibes, and the result is seriously disturbing. We’re not sure about you, but the happy-go-lucky tone of a family friendly eatery juxtaposed with the horrifying buckets-of-creepy-blood tone really gets under our skins. And that’s from a teaser that’s only half-a-minute long.

– Heat up the grill, turn on the fryer, set up the drinking machines and get ready to serve customers

– Manage the entire establishment: cook, put out fires, take out the trash, and get rid of unwanted rat guests while fulfilling customers’ orders in time to avoid infractions and end up meeting the wrath of Happy the Humble Heifer

– Stalk the streets and storefronts of New Elysian City, uncover audio logs and research pages to figure out the mystery of the place you call home

– During your spare time, listen to up to two hours of talk show and watch more than 60 television programs featuring epic cameos