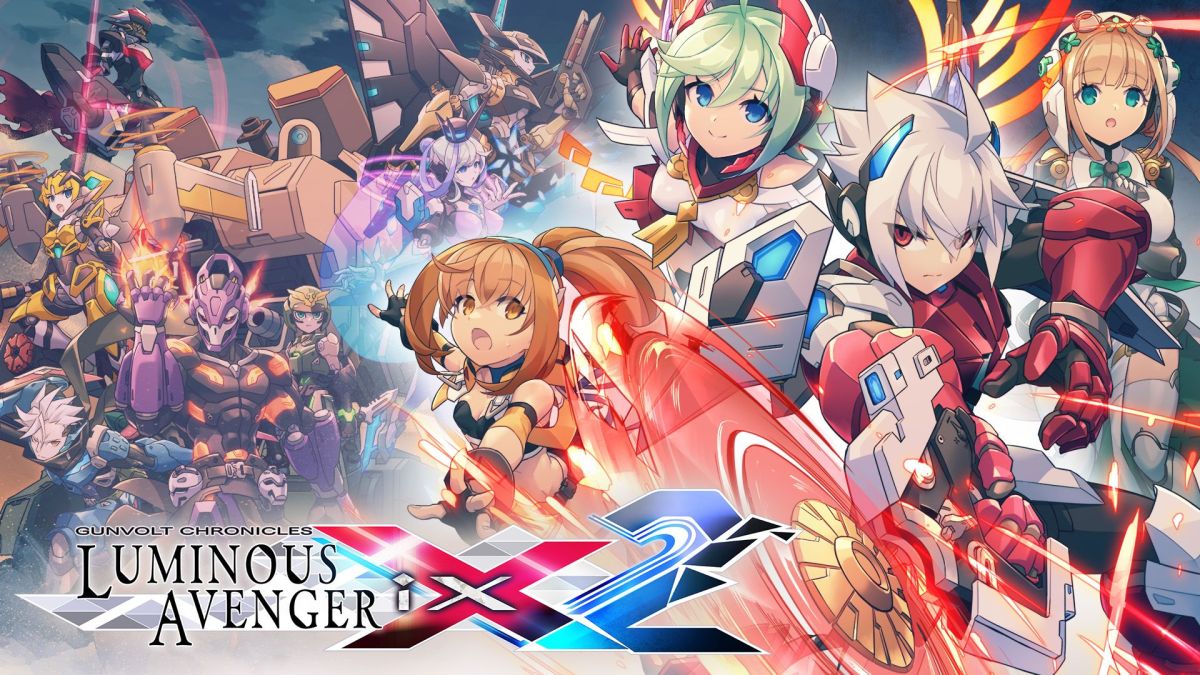 We get to see the full box artwork and learn more about the game and its characters.

Below you can check out the box artwork itself, character art, a look at the Grave Pillar, and a tease of the Gravekeepers.

Thanks to the efforts of Copen, the “Luminous Avenger iX,” the world is finally at peace.
It was during these peaceful times that Copenthrew himself into his research.
Some time after his battles ended, Copenfound himself in possession of a mysterious, rifle-shaped piece of tech called a “Blaster Rifle.“

Copen, along with Lola and Kohakuwho were sent there along with him, must search for a way home. They have the help of a Worker girl, Null, who leads them to a giant tower known as the “Grave Pillar” where the world’s secrets are said to lie. This is where their story begins…

They are descendants of labor robots created by humans. These intelligent robots continue to go by the name “Workers,” despite no longer serving their original purpose.
Since they were created to restore the barren environment to one suitable for mankind, they have adapted to using human infrastructure. Many of the Workers have humanoid frames.

A tower left behind by the Workers’ “Creator.”
It is said that all of the world’s knowledge is stored deep within.
The pillar originally served as a test site for experiments to restore the environment. Its interior contains replicas of a variety of climates and terrains.

They are special workers with orders to guard the Grave Pillar.
Both “Grave Pillar” and “Gravekeeper” were nicknames given by later generations of Workers.

The hero known as “Luminous Avenger iX” in his original world. Copen is a genius scientist of few words.
His armor can change seamlessly between two forms.

＜Break-Shift＞
Copen’s Break-Shift form was created to bring out the full potential of his new weapon, the “Razor Wheel.” It’s a power-focused form intended for close-range combat.
Along with the “Recoil Dash,” a powerful tackle attack that can send enemies and obstacles flying, the Break-Shift can also be installed with new abilities such as the “Hyper Guard” which can drastically reduce damage taken.

＜Bullit-Shift＞
Copen’s Bullit-Shift form is focused on speed and gives him access to the quick “Bullit-Dash” in mid-air.
Thanks to instantaneous changes in composition and structure, Bullit-Shift is drastically faster than Break-Shift.
However, its defensive capabilities are also considerably lower. To compensate for this weakness, it is programmed to instantly change to Break-Shift the moment before Copentakes damage.

She’s an autonomous, self-aware robot created by Copento to assist him in battle.
Lola is equipped with a weapon copy system capable of replicating enemy weapons using data she gathers in combat. She uses these weapons as she flies alongside Copenin battle.
While she normally exists as a spherical robot, she can transform into a humanoid form known as “Idol Mode.” In this form, she performs songs that have the power to enhance Copen’sabilities.
She has continued her career as an underground pop star in the parallel world, which brings lots of joy to the Workers.

A super positive and energetic young woman, Kohaku finds herself trapped in the parallel world alongside Copen.
Even in an unfamiliar desert world, Kohakuremains as positive as ever and can always be seen raising the spirits of her friends. Though she has a “knack” for repairing machines based on intuition alone, Copenhas put a moratorium on her maintenance duties for the time being.

Null
She is the new heroine of the Luminous Avenger iX series.
Null is a Worker girl who takes care of Copen and the others after they are sent to her world.
She has an innocent and sweet personality and is always polite to anyone she meets.
As a Worker, she strives to be of use to humans, who are seen as kin to the Creator, and works full time to help out Copen and Kohaku.