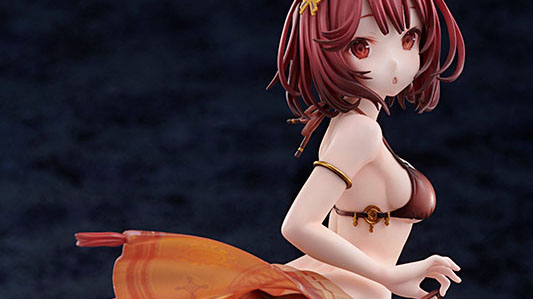 While the Atelier series has started to receive tons of figures with Atelier Ryza, Japanese manufacturers aren’t forgetting older installments, like Atelier Sophie: The Alchemist of the Mysterious Book.

Manufacturer Amakuni and retailer AmiAmi have teamed up to create a summery figure of heroine Sophie Neuenmuller herself, designed by character designer Noco.

The figure is available for pre-order at AmiAmi for 18,800 yen, which translates into approximately $171.

While she’s perfect for the summer, you won’t receive it during the warm months, as the shipment window is in November 2022.

She is sculpted in 1:7 scale for 22 cm in height by Ryuntaro (RyunRyunTei), with the paintwork for the prototype done by Emi Hoshina.

If you’re unfamiliar with the game, Atelier Sophie: The Alchemist of the Mysterious Book was released for PS4, PS4, and PS Vita in 2015 in Japan and then in 2016 in the west (the PS3 version did not make it over, understandably).