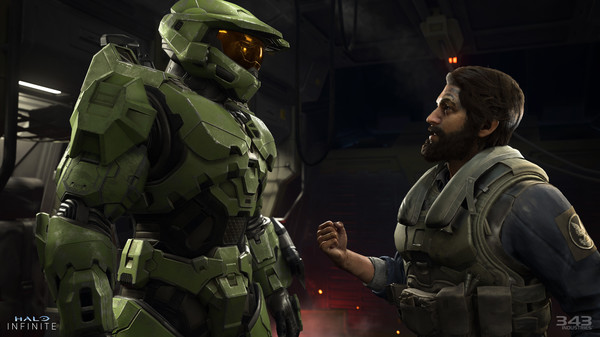 Earlier today, 343 Industries put out a development update video on YouTube going over some new details about the upcoming Xbox exclusive, Halo Infinite. Among the new information, there was also the news that two anticipated game modes will not be ready for launch.

To start, the producer of Halo Infinite, Sam Hanshaw, talked about how the preview went and what they learned. Overall, the team viewed the multiplayer preview as a success despite a few hiccups along the way. As Hanshaw put it, “It’s important to have those kinds of problems because those are the things we want to address now rather than have them crop up as a surprise at launch.”

At the end of Hanshaw’s time in the video, he announced that another big-scale flight like the one that happened in late July. The new flight will feature all of the same content as the last one plus four-on-four PvP and Big Team Battle. As of right now, there’s no indication of when this next flight will take place. It was also announced that this flight program will continue after Halo Infinite launches so players can test new features before they officially release.

You can take part in these flights by signing up to be a part of the Halo Insider Program.

Up next, Head of Creative, Joseph Staten, and Community Director, Brian “Ske7ch” Jarrard, reminisced about their time working together on Halo 3 ODST back in 2009. Getting into the actual content, Staten indicated that local split-screen will be available at launch for the console versions of Halo Infinite despite the mode’s absence in the recent flight.

However, it’s a different story for PC. The split-screen multiplayer mode will not be available at launch, but Staten said, “…it’s absolutely something the team is excited about exploring post-launch.”

To slightly temper fan expectations, about the improvements they’re working on, Staten talked about how the team already has a year-long road map that is being worked on by the development team. He also mentioned that feedback from the first flight will play a role in their development process.

Staten then explained why the team came to this decision, “Well, our number one priority is whatever we ship whenever we ship it, it meets the right quality bar across all platforms…” He continued, “And when we looked at these two experiences, Campaign Co-Op and Forge, we made the determination that they’re just not ready. And as a studio, we don’t want to ship things if they’re not ready…”

At the end of the segment, he confirmed that the team is still working on Campaign Co-Op and Forge, but that they’ll be a part of their year-long road map of releases. Staten said that their current goal is to launch Campaign Co-Op in season two and Forge in season three.

Staten went into further detail on the seasons, mentioning that their goal is to have three-month-long seasons. And he summarized that this means their goal is to launch Campaign Co-Op three months after launch and Forge six months after the game goes live. The development schedule, of course, is subject to change.

Immediately after talking about the delays on those two modes, Jarrard reiterated that 343 Industries is still committed to the Holiday 2021 release window. No official date was given, but as of right now both Jarrard and Staten were adamant that the game will not be pushed back any further. And Staten said the official release date will be revealed very soon.

As the video wrapped up, Staten promised that they will show off Campaign mode gameplay before launch. But it was announced that any gameplay trailers will be released closer to launch as the development team starts to wind down on the way to the release date.

Halo Infinite is launching on Xbox One, Xbox Series X|S, and PC this Holiday season. If you want to check out the full development update video you can click here or find it down below.