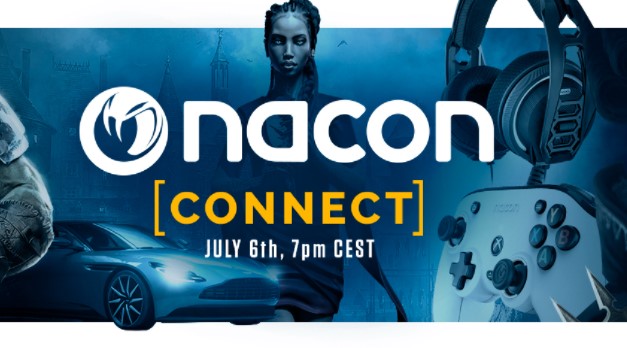 Earlier today during the Nacon Connect 2021 livestream, we got a look at a handful of new games and trailers from the French video games publisher and hardware manufacturer. You’ll be able to find all of the trailers from the event down below along with a video of the full livestream.

To start out the show, Benoit Clerc, head of publishing at Nacon introduced the stream and led into the new trailer for Vampire the Masquerade Swansong.

Big Bad Wolf Studio showed off some beta gameplay for the new game. You’ll be able to pick up Vampire the Masquerade Swansong on PS4, PS5 Xbox Series X|S, Xbox One, Nintendo Switch, and PC starting in Feb. 2022.

Daedalic Entertainment’s Harold Riegler (Producer) went into detail on the Lord of the Rings Gollum video game they’re working on. It’s set to release in Fall of 2022, but the platforms were not detailed.

Abrakam Entertainment had a new trailer for the Roguebook Gem Mine DLC coming soon to PC. No specific date was mentioned.

Hexate showcased a short trailer re-revealing their new game, Ad Infinitum, coming to PC and consoles in 2023. The specific consoles were not detailed.

After that, pro skateboarder Daewon Song talked about his inclusion in Crea-ture Studios skateboarding game, Session, coming to PS4, PS5, Xbox Series X|S, Xbox One, and PC. If you want to try it out now, the game is also available on Xbox Game Preview and Steam Early Access.

Up next, President of Spiders, Jehanne Rousseau showed off some alpha gameplay of their souls-like game titled Steelrising. The game is planned for a June 2022 launch on PS5, Xbox Series X|S, and PC.

Then it was announced that Bob Cornelius Rifo from the electric music group The Bloody Beetroots will be making the soundtrack for the new motorcycle racing game from Raceward Studios game, Rims. Pre-Orders for Rims starts tonight, and you’ll be able to pick it up on PS4, PS5, Xbox One, Xbox Series X|S, Nintendo Switch, and PC.

Leikir Studio and Cyanide Studio revealed a new trailer for Rogue Lords. The turn-based roguelike features classic villains like Dr. Frankenstein, Grim Reaper, and Dracula. Rogue Lords is coming to PS4, Xbox One, Nintendo Switch, and PC. The PC version is coming on Sept. 30 of this year, but the other platform release dates were not detailed.

Next, Cyanide Studio talked about their upcoming release, blood bowl 3. The lead cinematic artist, Yoann Drulhe talked about how many new mechanics in the game come straight from the board game.

As far as the story goes, each opposing team will have a star player that’s the face of the team’s sponsor. It’s currently unclear what significance this will play in terms of gameplay. Blood Bowl 3 is coming to PS4, PS5, Xbox One, Xbox Series X|S, Nintendo Switch, and PC in Feb. 2022.

Up next, Sebastian Loeb, nine-time WRC champ sat down to talk about WRC 10. The latest game in this long-running franchise is coming Sept. 2, 2021 on PS4, PS5, Xbox One, Xbox Series X|S, Nintendo Switch, and PC. If you pre-order WRC 10, you’ll receive a Subaru Impreza WRC 1997 & an exclusive historical event.

Cyanide Studios released a new trailer for their Life line of simulation games. The ones mentioned in the trailer were Chef Life, Hotel Life, Train Life, Surgeon Life, Architect Life. All of these games are coming to Xbox One, Xbox Series X|S, PS4, PS5, Nintendo Switch, and PC. There were no release dates announced in the trailer.

Up next, the head of accessories at Nacon, Yannick Allert, had a few new devices to talk about. He talked about the MG X and MG X Pro controller for playing streaming games on mobile devices. They’re also working on a new Xbox controller called the Revolution X, which is fully customizable for competitive Xbox players. It features a detachable USB cable, headset port with Dolby Atmos support, and convenient buttons on the back of the controller. The Revolution X controller is coming fall 2021 for Xbox Series X|S, Xbox One, and PC

After that, Allert went into detail on some new PlayStation accessories. First, he announced two new headsets for the PS5. The RIG 400 HS and the RIG 500 PRO HS. They also showed off the RIG 200 HS streaming mic for PS5. Finally, the PS5 Daija fight stick is an upgrade to the PS4 version. No release dates were announced.

Andres, Carlos, and Edmundo Bordeu, from Ace Team. Showed off their new game which features third-person hand-to-hand combat and terrifying creatures. The game is titled Clash: Artifacts of Chaos and it’s scheduled to launch in June 2022 for PS4, PS5, Xbox Series X|S, Xbox One, and PC.

Alain Jarniou (creative director) and Amaury Beyris (game & art director) from KT Racing then showed off a new trailer for Test Drive Unlimited Solar Crown, which is set to take place in Hong Kong. This open-world racing MMO will let players decide who to join between two rival clans (Streets and Sharps) and rise up in their respective ranks. Test Drive Unlimited Solar Crown is coming to PS4, PS5, Xbox One, Xbox Series X|S, Nintendo Switch, and PC on Sept. 22, 2022.

To close out the Nacon Connect 2021 stream, Teyon announced a brand-new game in the RoboCop universe titled, RoboCop Rogue City. The game is coming to consoles and PC in 2023. No specific dates or console platforms were announced.

You can find all of the individual trailers from Nacon Connect 2021 and the full stream down below.