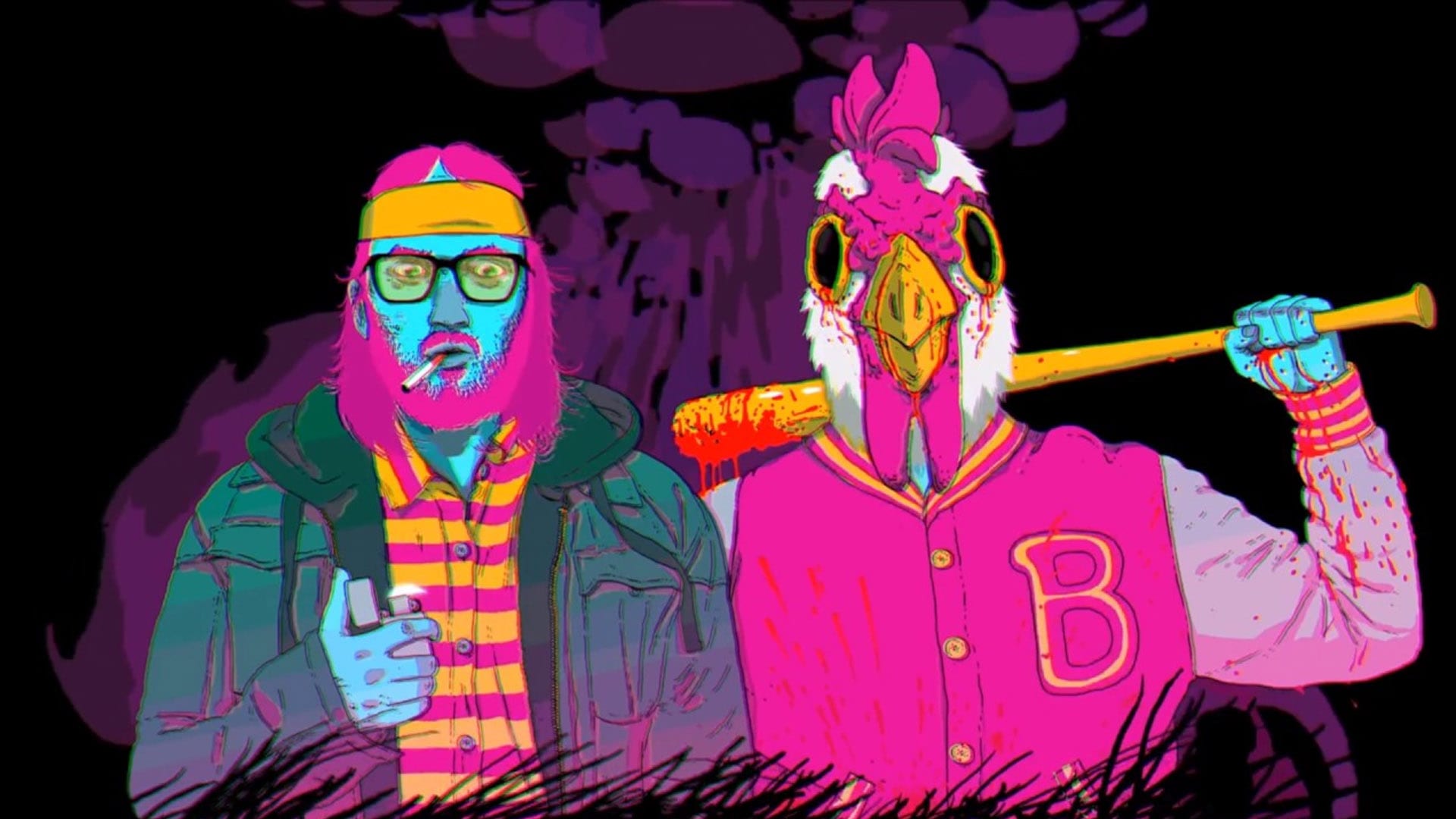 Devolver Digital is one of the the world’s most well-known indie video game publishers and developed a pristine reputation in the industry for supporting fantastic up and coming indies. They have a wide variety of titles in their publishing portfolio so let’s take a look at seven of the best Devolver Digital games that are easily accessible and are worth playing right now.

The game that put Devolver Digital on the map. I want to introduce you all to Hotline Miami, a top-down retro-styled shooter that oozes with the style of the sun-soaked metropolis of Miami in the late 80s.

You play as a hitman who goes through buildings, offices, and secret clubs and has to literally kill every person on the map to finish the mission.

It’s so exhilarating because you die very quickly in Hotline Miami, but so do your enemies. It gets extremely frantic and frustrating and will certainly have you facing loss many a time.

You pick yourself up off of the ground and keep trying and trying by using different routes, a variety of masks that grant special skills, or even choosing a different weapon.

The EDM soundtrack fits the vibe of the game perfectly, and there’s just enough content there that can be easily finished in a few hours.

It’s a great game to play on the go as well, so playing on the Switch or on a Vita is highly recommended.

If you take what makes Hotline Miami so great and then translate that over to a 2D action-platformer, that’s basically what Katana Zero is, except it’s more cyberpunk than Miami Vice.

You die in one hit as well, and your goal is to kill every enemy in the room with your trusty katana. You can even gain special slow-motion abilities, allowing you to do things like slash an incoming bullet back at the attacker.

It’s really slick and smooth and fast-paced, and doing anything in the game feels incredible. It’s one of those “just one try” games that you’ll keep coming back to.

Fall Guys is a newer release from Mediatonic and Devolver Digital. It’s a battle royale and party game hybrid with bean-like characters competing in several mini-games to try and get the number one spot, which, in this case, is a big golden crown.

You can dress up your adorable little bean with all kinds of cool costumes and even some based on other video game characters like Sonic the Hedgehog.

It’s insanely enjoyable and comical to watch all of the players run and fall all over the varied stages while wearing the dumbest outfits.

Getting that win can take a lot of time (I still haven’t won a game) but as long as you’re laughing and having a fun experience, losing isn’t the worst thing to happen in Fall Guys.

Another Devolver Digital game with lots and lots of action, we have Ape Out. It’s a top-down action game where you play as an Ape trying to escape from prison. He gets out of the cage, and you need to get out by using the guards to your advantage.

You can smack away the humans, start a hostage situation, or even steal/shoot their guns; you do whatever it takes to take control of the situation.

And probably the best part of Ape Out is that its over-the-top gameplay is made even crazier thanks to the jazzy instrumental music that follows your every move.

The more frantic things get, the wilder the music becomes. It’s a fantastic and inventive approach to music in video games.

Carrion lets you feel like the ultimate villain of some gruesome 90s horror film. You get to take control of this “creature” (look above) that can grow stronger by literally eating the flesh of humans that work in a secret facility.

Similar to Ape Out, you’re just trying to get the hell out of this place. There’s backtracking and different abilities that you can obtain, making the game feel very Metroidvania-like.

Using monsters to grab humans and then throw them around like rag dolls is immensely satisfying, and the creepy music truly makes the experience scary, even though you’re the one that’s murdering folks.

Gris is one of the most heartfelt and emotional indie titles out there that tells a tale about a young woman attempting to restore color to her world while also dealing with some serious, heavy memories that haunt her.

It’s a 2D puzzle/platformer and you’ll spend most of your time exploring environments, gaining special abilities, and evading some enemies.

The game is absolutely gorgeous with a visually appealing watercolor art style that mostly focuses on colors like pink and blue to show off the detail of the game’s melancholic and dreamlike setting.

Gris is wonderful and definitely one of Devolver Digital’s more artsy games if that’s your sort of thing.

At first, this 2D action-sidescroller will very much resemble old-school classics such as Ninja Gaiden and Contra, but The Messenger has a twist. That twist fundamentally changes the aesthetic of the game.

It’s not a difficult game either as it has a fair amount of challenge while also making you feel insanely cool, thanks to the different traversal abilities you can unlock. Its pixelated art style is super pleasing to the eye, and the soundtrack will have you tapping your toes in mere seconds of listening.

The Messenger also has excellent writing that doesn’t take itself too seriously, with lines of dialogue that are sure to make you giggle a bit. As far as best Devolver Digital games go, this one is up there.