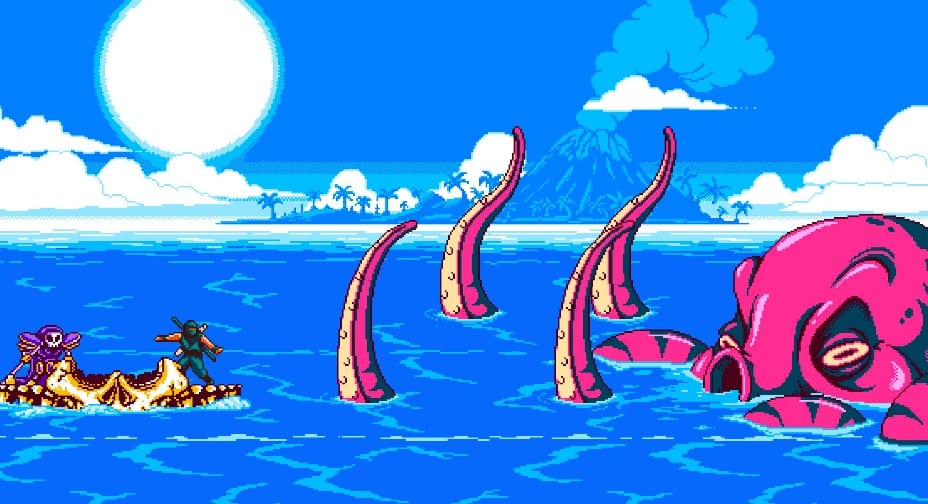 Last year, Sabotage Studio’s genre-bending action-adventure title, The Messenger, was well-received by critics around the world. 2018 was their year with an average score of 86 on Metacritic (Switch version) and a Game Awards victory in the category of Best Debut Indie Game against highly regarded titles like Donut County and Moss.

To keep that momentum going through 2019 they recently released the Picnic Panic DLC.

It’s an add-on that mostly captures what made the base title fantastic; however, the enjoyable sections are bookended by relatively uninspired segments that lose sight of what made The Messenger a great game.

Picnic Panic begins with an entertaining and brief comedic segment featuring the short necromancer Ruxxtin trying out some stilts for an upcoming date.

This opening scene has all the comedic writing you’d expect from The Messenger, but once you grab the reins, things take a turn for the worse.

The first gameplay segment in Picnic Panic is a surfing minigame where you need to dodge rocks, fish, and flotsam to make it to Voodkin Island.

You have one simple attack that surges forward, but most of your time in this section will be spent avoiding obstacles. The gameplay is dull and almost feels like a barrier of entry to the enjoyable part of the DLC.

Even though you’re moving at a torrid pace through the water, they manage to make this section of Picnic Panic feel far too long. It reminds me a bit of the shmup section from the base game, only much less interesting thanks to the lack of attack and enemy variety.

The Octo boss fight is the one bright spot of the surfing segment, but it’s still missing the intricacies of the bosses in the base game.

What made those other bosses so great was that they took the skills you learned throughout the game and applied them in unique ways and all their different attacks required mastering varied techniques to counter them.

This carries over in a small way since you can reflect Octo’s ink blasts with your attack, but there’s no way to know that’s possible before doing it.

What’s even worse is that you just keep spamming that single attack to deflect all the ink blobs and then ram Octo to damage him. Sure, the timing matters, but such a straightforward boss battle in The Messenger just feels wrong.

Following the lackluster surfing section comes the good part of Picnic Panic that’s your typical enjoyable combat and navigation of the new location, Voodkin Island. It’s a great reminder of what makes the wonderfully-designed levels in The Messenger such a joy to play.

To top it all off, there’s also a great boss and incredibly difficult race section that tests your mastery of the game’s controls against a dark version of yourself.

After fighting through Voodkin Island and accidentally unleashing the full power of the demon Barma’thazël, you find yourself deep in the crater of a volcano. This is where the gargantuan final battle in Picnic Panic takes place.

You yet again “Do the thing,” which summons the Arcane Golem, but this time around you’re in for a Punch-Out-style boss battle versus the Demon General.

For how epic the showdown was supposed to be, Barma’thazël was closer to the Glass Joe end of the spectrum when it comes to difficulty. In a game where death and trial and error are the norms, this massive showdown is, unfortunately, the easiest boss battle in The Messenger.

This fight uses no tools or skills from the previous 15 to 20 hours of gameplay that brought you to that point.

Not only does it feel like a waste of a boss fight, but it’s just a shame to see Sabotage come up with something so unoriginal when the base game was chock full of wonderful level design and gameplay ingenuity.

Yes, I know The Messenger is a spiritual successor to Ninja Gaiden, but it went far above its original inspiration and stands on its own as a fantastic title.

The base game handles genre-shifting incredibly well, whereas this final boss battle and the surfing section in Picnic Panic feel so uncomfortably out of step with the rest of the game that they stand out as uncharacteristically bland.