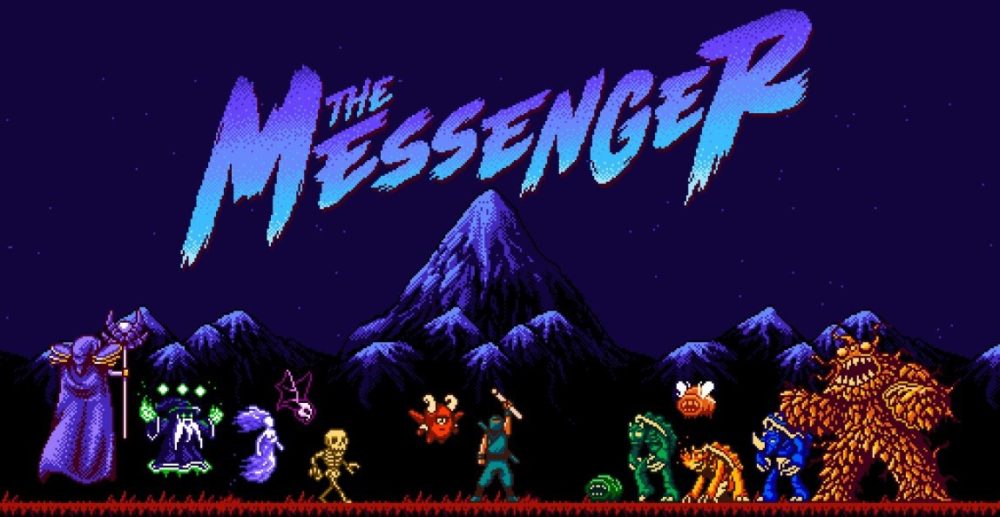 The Messenger on Switch

The Messenger wears its inspirations on its sleeve. From the chiptune intro to the introduction of the edgy, though lackadaisical, ninja protagonist, it’s easy to see that The Messenger is a loving callback to ye olde games of yore. Namely, the good ol’ Ninja Gaidens, and later, the darling Metroids and Castlevanias.

The story setup is simple enough. Players take control of an unnamed ninja whose village one day gets invaded by a demon army, as was prophesied in his history lessons. As everything gets engulfed by flames around him, the fabled western hero shows up on an eagle and tasks the ninja with carrying a scroll all the way east across the island if they’re to have any hopes of saving the world. Pretty straightforward stuff, and the game wastes no time in getting you going.

Levels play out as standard action-platformer fare, and the game is rendered in retro 8-bit graphics to evoke your early childhood memories of playing Ninja Gaiden on the NES. For the first six to eight hours of the game, The Messenger is a competent, though fairly dull, platformer to play through. The controls are simple and responsive; you’ve got your basic attack, a jump, as well as a cloudstep that lets you jump, hit something, then trigger a second jump. As you start to get into the groove of things, traversal becomes second nature to you, and it starts to get fun jumping from platform to platform, wall-climbing your way up to success as you take down enemies along the way.

You’ll also get combat upgrades and extra tools to work with, thanks to the game’s comical shopkeeper who’s always got a snarky comment or two to make. Before long, you’ll get a nifty wingsuit that lets you glide, as well as a grappling hook that lets you latch on to walls in mid-air. Once you hit that point, your traversal options really open up, and it becomes much more fun to move through the levels.

While playing on Switch, the controls worked fine, though I did find myself wishing the jump and glide functions were mapped to different buttons. Prior to gliding, it was pretty easy to pull off a cloudstep by jumping, hitting, then jumping again. But with the new glide mechanic, pulling off a cloudstep is much trickier, and a little more inconsistent, which isn’t great, especially since cloudstepping is so crucial to the experience. At the end of each level, there’s also a boss fight to get through, and most of them are pretty easy to beat. Dying in The Messenger isn’t overly punishing either, thankfully. Death in the game will summon a small monster named Quarble, who will charge you a small fee of Time Shards (the game’s currency) each time he saves you from your demise. Checkpoints are pretty frequent as well, so there’s never really a heavy penalty for failing a jump too many times.

In fact, the opening hours of The Messenger can be really slow going, especially as you’re mostly fighting the same enemies over and over, and the bosses themselves aren’t even that much of a challenge. Things only really start to step up when you reach the game’s ‘final’ area, and the big story and gameplay twist finally reveals itself.

If you’ve seen any footage of The Messenger, you probably already know what the twist is. As it turns out, The Messenger is actually two games in one, with a fantastic Metroidvania hiding behind the somewhat lackluster 8-bit action platformer section. After some interesting story twists, the ninja is sent forward in time, and with that, we get treated to a visual and audio upgrade as well. Now, the whole game plays out in 16-bit. The enemies are more detailed, the environments are more varied in terms of color palette and vibrancy, and the music gets elevated even further, if that were possible.

At this point, the game transforms into a Metroidvania where you’re able to revisit past levels and access secret areas you couldn’t get through before. The time travel mechanic is interesting as well, as you’re allowed to past through time rifts to check out the 18- and 16-bit versions of that area, and then navigate through them to get to your objective. This is where the game really starts to shine, as the very idea of traveling through time and differentiating the eras with NES and SNES-style graphics is absolutely brilliant. The game runs flawlessly on the Switch, and going back and forth between eras was both seamless and nothing short of satisfying.

Even in terms of storytelling, finally unlocking the 16-bit section of the game expands it so much more, and flips the cliched premise on its head. All of a sudden, The Messenger becomes infinitely more interesting. The problem? A, it takes a little too long to get to that point. And B, backtracking through old areas you’ve already been through isn’t that fun, and you’re forced to go on an epic fetch quest that stretches on for a little too long as well. 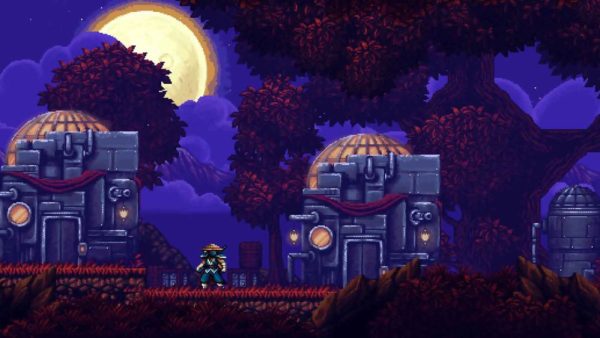 In the second half of the game, the story pushes you to continue with your journey to find a solution to finally defeat the demon king once and for all. You’re then tasked with finding several items scattered across the levels before you can move on to the final confrontation. At first, revisiting older areas isn’t that bad. Armed with a map and new traversal abilities, it’s much easier to move through the levels quickly and discover hidden areas.

However, the bulk of the experience is just pure exploration, with very few boss fights to break up the monotony. Whereas the first half of the game featured bosses at the end of almost every level, and helped to cap off your experience in that area, the second half is a little more one-note in terms of pacing. It certainly doesn’t help that there aren’t that many enemy types to deal with, and you’ll be fighting the same guys for the most part. Oddly enough, The Messenger also adopts the Ninja Gaiden method of respawning enemies once they’re off your screen, which can be really annoying especially if you fail a simple jump and drop back down to a level just two feet below, and you see that every single enemy has respawned.

Once you’ve finally progressed far enough, though, the final areas in the game are nothing short of entertaining, and they certainly made up for all the slog that came before.

Tying everything together is the game’s stellar soundtrack, composed by Rainbowdragoneyes. The music is unbelievably catchy, and it only gets better when you get to hear the 16-bit versions in the second half of the game. Audio design is absolutely on point as well, and the game is full of nice little touches, where the music would muffle a little when you’re diving into water, before seamlessly bursting into full volume once again when you emerge.

The Messenger also prides itself in delivering comic relief in its writing, which may be a little hit-or-miss for some people. Most of the snarky writing comes through the hooded shopkeeper, who delivers some comedic bits and gags that can sometimes be funny, and can also sometimes be kind of lame and cheesy. It’s not just the shopkeeper either; every boss and NPC has something smart to say, and while their references can sometimes be smart and on the nose, again, other times they can feel hamfisted and a little forced.

Overall, The Messenger is a really solid game for fans of the platformer and Metroidvania genres. Had the first half of the game been a little more condensed, and the second half not been too dragged out, the game could’ve been near-perfect. Even so, if you have even an appreciation for retro or old-school games, you can’t go wrong with The Messenger.