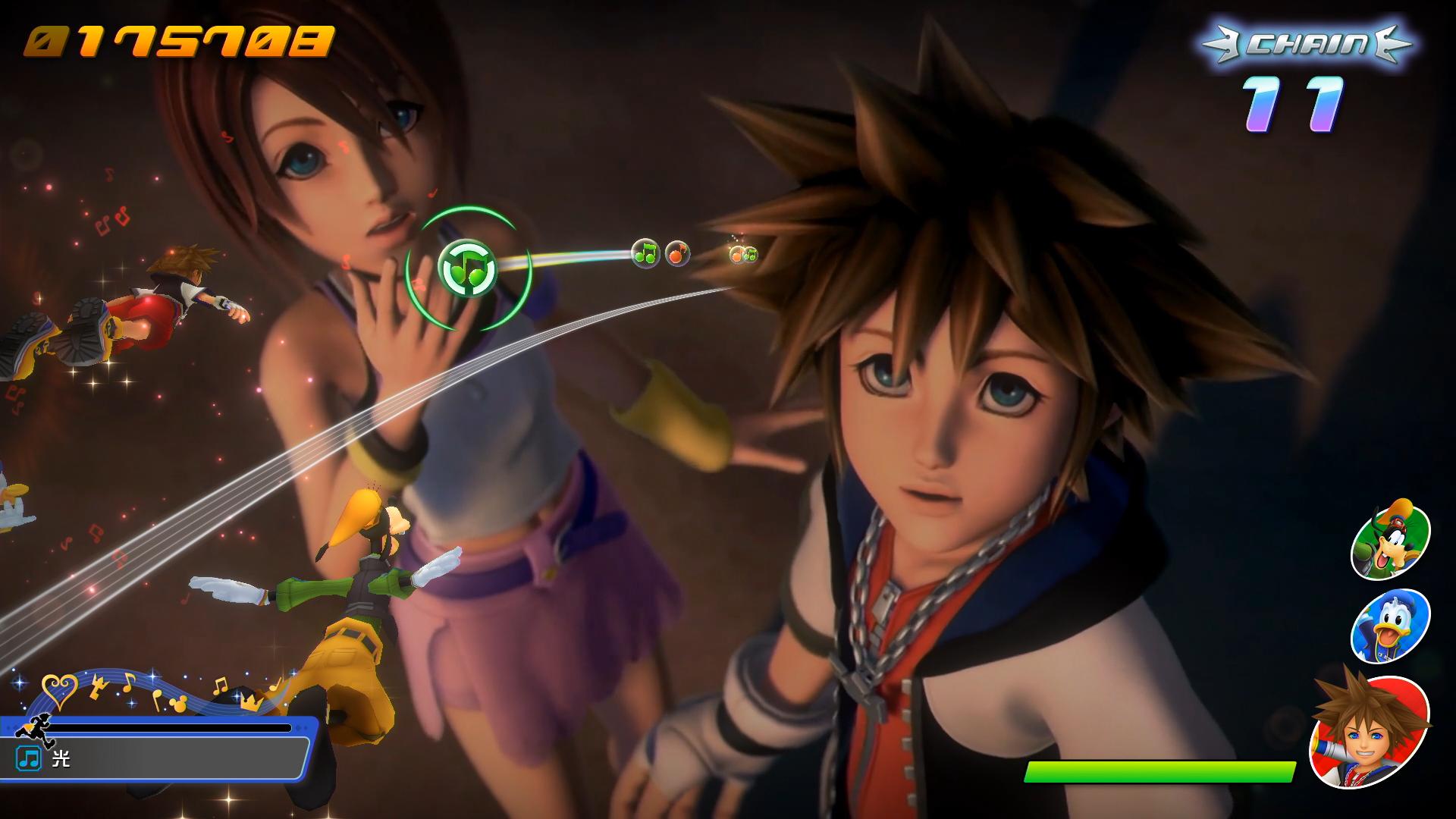 We learn that there are three different gameplay styles. Normal does what it says on the ton. One Button lets you focus on the rhythm by binding all actions to a single button. Performer Style actually increases the number of buttons required to play, and it’s for those who enjoy rhythm games with complex inputs.

As for modes, one lets you travel between worlds with the Gummi Ship and discover both music levels and story scenes. There are three difficulty levels and songs unlocked this way can then be individually played in the Music Select mode. Past story cutscenes can be viewed at any time in the museum.

There are also different types of stages. The Battle mode has you defeat enemies by running with your party along the track.

The Memory Dive mode is perhaps the most classic rhythm game style, as it lets you play over music videos.

Boss Battles are pretty much what you expect, and if you manage to hit the notes correctly, you can avoid devastating attacks from the boss.

There is also an online versus mode that lets you compete against other players online. The Nintendo Switch has a local versus mode as well.

Another mode lets you compete asynchronously over online leaderboards, while the Battle Royale mode is available only on Switch and lets you compete against your friends locally with up to eight players. There is an elimination method that drops players that miss notes a set number of times until the player with the highest score remains.

Lastly, there is a couch co-op mode that lets two players take control of Sora and Riku on the same console.

You can check out all the screenshots below. Incidentally, the game comes with over 140 songs.

Kingdom Hearts: Melody of Memory releases on November 13, 2020, for PS4, Nintendo Switch, and Xbox One.

Below you can read an official description if you’re not familiar with the title.

“In Kingdom Hearts: Melody of Memory, a whole host of familiar Disney friends, foes and adventures await. Players will experience the magic of musical exploration by traversing through worlds packed with rhythm-action challenges as they collect and master over 140 songs from the Kingdom Hearts series along the way.

Whether alone, or with friends and family via local co-op and online multiplayer, players will need to defeat tough enemies and bosses to achieve the top ranks. Through three different play styles, gamers of all ages can choose their level of challenge depending on whether they want to enjoy the songs and adventure without complicated controls, or showcase their skills with complex combos to put on the ultimate performance.”

If you want to see more, you can also enjoy the latest trailer, an earlier trailer and gallery, and more screenshots from earlier today.

You should also definitely read our interview with the developers.