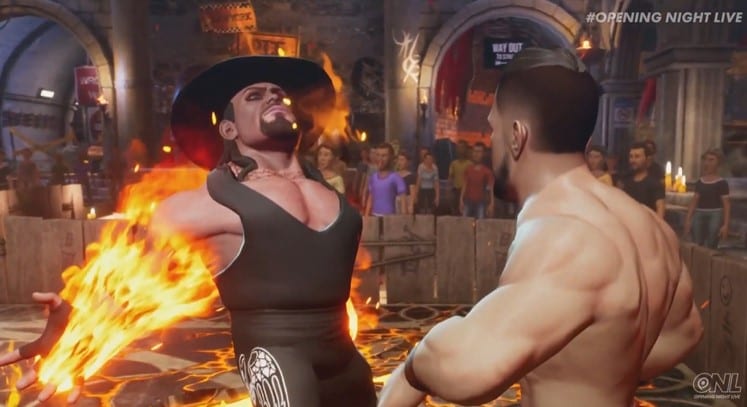 Earlier today during the Gamescom 2020 Opening Night Live stream we got a new look at some gameplay featuring WWE legends and current Superstars brawling in WWE 2K Battlegrounds.

Throughout the trailer we see the WWE legends and Superstars going toe to toe by unleashing their finishing moves on each other. We saw the Undertaker taking it Finn Balor outside of the ring and AJ Styles landed the Styles Clash on Taker inside of the ring.

We also got a preview of an item that you don’t typically see in wrestling games. It was only for a split-second, but there was a toy hammer used as a weapon in one of the matches. It points towards the inclusion of non-standard wrestling game weapons.

And of course, there were plenty of wrestlers glowing with orange, purple, and all other colors of auras. WWE 2K Battlegrounds appears to be one hectic and action-packed arcade wrestling game.

And you can finally try out all the wrestlers from this brand-new trailer when WWE 2K Battlegrounds launches on Xbox One, PS4, Switch, Stadia, and PC on Sept. 18 of this year.

And if you just can’t get enough new game trailers, then you can find the full Opening Night Live stream below.