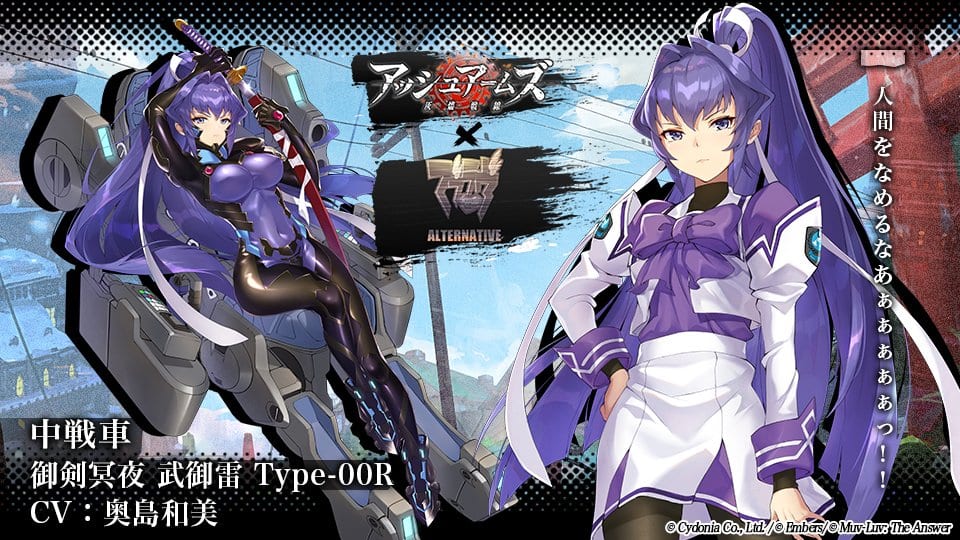 The Muv-Luv franchise is having a collaboration event with the mobile game ASH Arms by Cydonia.

The collaboration was announced a few weeks ago and ikt was recently launched, bringing brand new renditions of popular heroines from the popular Muv-Luv series of visual novels.

We get to see Meiya Mitsurugi from the original trilogy, Yui Takamura from Muv-Luv Alternative: Total Eclipse, and Irisdina Bernhard from the prequel Schwarzesmarken.

You can see them all below, alongside a look at the in-game sprites for the Mig-21 Balalaika TSF fighting against a bunch of Laser-class BETA.

Unfortunately, Ash ARMS is available only in Japanese, but you can enjoy the best part of the collaboration below.

If you want to learn more about Muv-Luv, developer âge recently revealed the first official trailer of the mecha action game code-named Project Mikhail, another for the Diablo-esque game Project Immortal (alongside some gameplay), the first look at the Muv-Luv Alternative anime, and the upcoming Steam release of Muv-Luv Unlimited The Day After.

We also have a detailed  report of the 20th-anniversary event  recently hosted in Tokyo, which was rich with announcements, including the  reveal of Muv-Luv Integrate , the the announcement of Project Mikhail , an  update on Muv-Luv Unlimited The Day After and on the Android version of the original trilogy , the  tease of the reboot of Kimiga Nozomu Eien , and the  original announcement of the Muv-Luv Alternative anime.