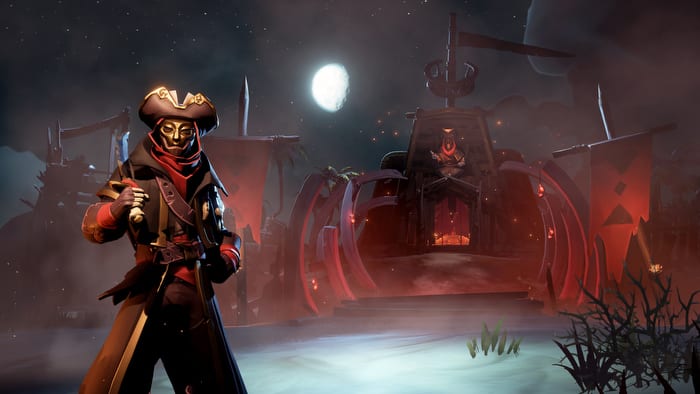 Sea of Thieves’ next content update brings some notable changes to the game, and Microsoft has unveiled some info on these changes ahead of its release.

During Microsoft’s April 2020 Inside Xbox event, the company showed off some of the changes and new content from the game’s next update, titled Ships of Fortune, in action.

Through the update, players will receive a call for Emissaries by the game’s trading companies, and will be given a choice of which to join in an attempt to gain control of the world’s seas. Each faction comes with its own cosmetics to unlock, as well as other rewards and benefits to earn through the update’s expanded Reputation system.

Players will have more than the game’s current four factions to choose from though. A new faction, the Reaper’s Bones, throw a chaotic option into the mix, with missions and tasks aimed at burning the other factions and the world at large to the ground.

The update will also offer cats as a new option for pets players can take along on their adventures. Though they might spend most of their time napping, they can be petted, scratched and dressed up in nautical costumes to the player’s content, and will be available to anyone interested in them.

Rounding out the reveals were some overhauls that would be applied to Sea of Thieves’ arena mode. Instead of deciphering a treasure map, players will now be able to spot and make their way toward a single treasure chest on the map; and, once they have said chest, they’ll only have one location where they can turn in their spoils for points toward a victory.

They’ll likewise have less ground to cover before confronting one another and less time to fill during matches. To top it all off, players can now be revived during a brief window after they’re defeated, helping to further speed up matches and keep the game[play action-packed.

There are plenty of other small details that fans of the game will want to see for themselves, and they can do just that by viewing the trailer down below.

Sea of Thieves is currently available on Xbox One and PC, and the Ships of Fortune update is set to drop on Apr. 22. For more on the game, check out our coverage of the game’s last major update, Heart of Fire.