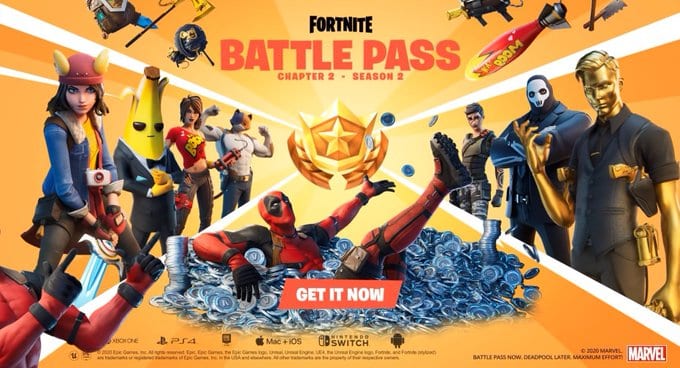 Eagle-eyed Fortnite fans among you may have noticed a particular comic book character showing up here and there throughout the Chapter 2 Season 2 trailer. That’s right, Deadpool could be spotted tucked away in the background a handful of times, and promotional material for the new season suggests it’s an unlockable skin. Here’s how to get Deadpool in Fortnite.

Getting Deadpool Skin in Fortnite

To get Deadpool in Fortnite, you’ll first need to buy the Chapter 2 Season 2 Battle Pass. This simply unlocks the ability for you to get the skin, but there’s still work to be done.

On the screen where you purchase the Battle Pass, it’s revealed that Deadpool is “the secret Battle Pass skin.” It would appear as though, judging by one of the challenges that can be found at the challenge table, that we’ll need to ‘Search Deadpool’s Letter to Epic Games’ in order to unlock him.

The letter is actually really easy to find. From the lobby screen, look for the vent in the wall that you can interact with. We’ve highlighted it in the image below.

From there, you’ll be able to interact with a computer, which will show you the Deadpool challenges, as well as something on the floor by the urinal.

Interact with this and you’ll find it’s Deadpool’s letter. Now if you check the computer, you’ll have your next challenge, which is to ‘not thank the Bus Driver.’

This is actually incredibly simple, just don’t thank the bus driver as you normally would (or wouldn’t) in a game of Fortnite. At the end of the game, you’ll have completed the challenge.

The first of the Deadpool week 2 challenges in Fortnite requires players to find Deadpool’s Milk Carton.

To do this, you’re going to want to go through the vent on the Battle Pass screen once again into his Deadpool’s little hideout.

Once there, you’ll find Deadpool’s Milk Carton on the left-hand side of the screen, on top of the urinal. Seems like a grim place to leave milk if you ask us, but the rest of Deadpool’s hideout doesn’t seem all that suitable either.

The second of the week two challenges requires players to find three Deadpool Chimichangas around HQ.

The first and easiest of Deadpool’s Chimichangas to find is right below the challenge table on the Battle Pass screen next to the ‘BOOM’ canister.

The second of Deadpool’s Chimichangas can be found in the ‘Upgrade Vault’ from the top right-hand corner of the Battle Pass screen. It’s on the shelf behind Maya.

The next thing we’ll need to do is track down Deadpool’s Plunger. It’s in HQ once again, so you won’t have to start a game.

Go to the ‘Agents’ option in the top right-hand corner of the Battle Pass screen. Next, select TNTina who is the second option and watch the cutscene play out.

After this, you’ll find Deadpool’s Plunger stuck to the wall just next to some blueprints in the top right-hand corner of the screen. Select it and you’ll complete this challenge.

The next Fortnite Deadpool challenge you’ll need to complete requires you to destroy three toilets.

These can either be the blue porta-loos dropped around the map, or it can be the actual toilets you find in the many, many houses across the map.

Your best bet for this is to go to a named location like Retail Row, Salty Springs, Lazy Lake, or Misty Meadows. Go inside any of the house-looking buildings and you’ll find a bathroom upstairs with a toilet in. Destroy three of these and that’s you all caught up with the Fortnite Deadpool Challenges once again.

You’ll need to find two of Deadpool’s Katanas in Fortnite for the next challenge. The first can be found in Wade’s secret hideout itself. Deadpool’s Katana is literally sticking out of the wall above his PC.

The second of Deadpool’s Katanas can be found in the Upgrade Vault. This is where you can customize your Maya skin, and is found in the top right-hand corner of the Battle Pass screen.

Once here, you’ll find the katana stuck in the wall just behind her.

The next step of the week 4 Deadpool Challenges in Fortnite requires players to deal 100,000 damage to opponent structures. This is one you’ll just naturally unlock as you progress throughout the season, so don’t worry too much about it.

The main thing you need to keep in mind is that if you destroy the bottom of a large opponent structure, which leads to a number of wall and ramp tiles being destroyed, the hit points for each destroyed structure piece will count towards this challenge.

To find Deadpool’s Stuffed Unicorn for the week 5 challenges, you’ll want to once again head to the ‘Agents’ tab from the Battle Pass screen. Select Meowscles and you’ll find unicorn on the floor by some weights.

The second part of the week 5 Deadpool challenges requires players to visit the different colored steel bridges around the map. We’ve marked their locations on the map for you below.

Your best bet for completing this is to land on a Choppa, and then quickly fly it past each of the bridges before the storm circle closes in. This is the fastest way to visit all of the bridges and get this Fortnite Deadpool challenge finishes.

Week 6’s first Deadpool challenge tasks you with finding his Big Black Marker. Like all of his other items, you’ll be able to find it within the Battle Pass screen.

Specifically, select the ‘Agents’ option in the top left-hand corner of the screen and select Brutus. You’ll find Deadpool’s Big Black Marker sitting on the table just in front of the computer monitor.

The second part of the Deadpool week 6 challenges in Fortnite requires players to deface GHOST or SHADOW posters.

These can be found on the sides of buildings all across the map. We’ve got a recruitment posters locations guide to direct you to plenty of them if you’re struggling to track them down yourself.

The second of Deadpool’s pistols is in Meowscles’ room within the Agents option in the top left-hand corner of the Battle Pass screen. Once in his room, you’ll find the pistol on the floor in the bottom right-hand corner of the screen next to some weights.

The last of the Fortnite Deadpool challenges you’ll need to complete to unlock him is to enter a phone booth or porter potty. These are scattered all across the map. We’ve circled the locations of some of these below.

Once you’ve found one, head inside and you’ll emerge as the one and only Deadpool in Fortnite.