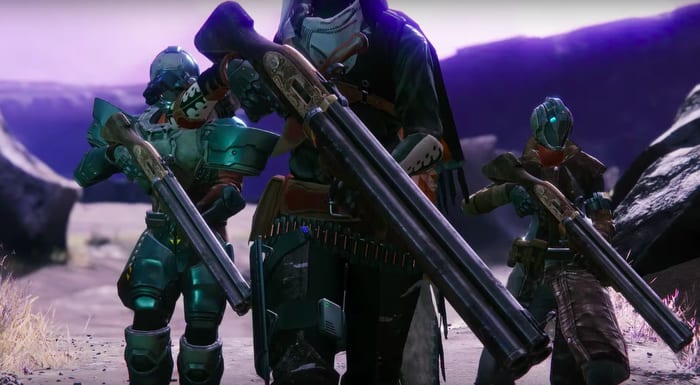 The Fourth Horsemen is coming to Destiny 2, and players can see what the legendary Exotic has to offer to their arsenal thanks to a new teaser trailer.

Streamed on Mar. 17 via the official Destiny YouTube channel, the trailer shows off the quadruple-barrel energy shotgun in action while also hyping up the perks it brings to the table.

In addition to being exceptionally powerful on its own, the weapon gains increased fire power and spread with each subsequent shot fired. Not only that, but it’s fully automatic, allowing Destiny 2 players to bombard enemies with a steady stream of punishment to ensure they deal as much damage as possible as fast as they can.

This is all set to footage of the Fourth Horseman in use by three Guardians. Side by side, they tear through hoards of enemies ranging from basic to bulky, blowing them all away with ease thanks to their choice of armament.

Little else was revealed about the gun – namely, what Destiny 2 players would have to do to get one for themselves – but it’s still a nice teaser of what could be in store for those willing to do the leg work to get such an impressive weapon.

The Fourth Horsemen trailer comes while Destiny 2 is in the midst of its latest season of content, titled the Season of the Worthy. It’s brought with it plenty of new Exotics to unlock, and we’ve been hard at work detailing how to unlock them all with a series of helpful guides.

Destiny 2 is currently available on PlayStation 4, Xbox One and PC. For more on the game, check out our deep-dive into whether the game’s ‘you had to be there” approach to season design worked, and whether or not it might continue into future seasons of content.